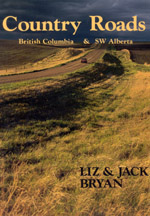 Review of the author's work by BC Studies:
Country Roads of British Columbia: Exploring the Interior

Country Roads of Western BC: From the Fraser Valley to the Islands (Heritage 2011)

Articles: 1 Article for this author
Stone By Stone (2005)
Press Release


"Discover the hidden depths of Canada's prairie past in Stone by Stone: Exploring Ancient Sites on the Canadian Plains, a new book by Liz Bryan. From medicine wheels to projectile points, and from petroglyphs to effigies, Stone by Stone is a unique guidebook that takes the reader on a journey that includes buffalo jumps, vision quest sites, enigmatic cairns, and more.

"The prairie past belongs primarily to the First Nations, the inhabitants of what is today Southern Alberta and Saskatchewan-a huge expanse of billowing grassland-for at least 12,000 years. Before European settlement, they were nomads, anchoring their lives only to the buffalo, upon which they depended for virtually everything: food, shelter, clothing, implements. Touching the land only lightly in their seasonal buffalo rounds, the first people nevertheless left signs of their passage-in enduring stone.

"Lying on the land where they were placed centuries ago, the stones are hard and evocative evidence of ancient lives as compelling as any Old World monument-and, in some cases, far older. Many of these sites can be visited today. Stone by Stone is a guidebook to these places, with directions and explanations. While examining the historic past of the First Nations, the book also celebrates their vibrant present, for many are eager to share their legends and traditions. Native interpreters bring the past-their past-to life at many internationally famous sites, such as Head-Smashed-in Buffalo Jump, Writing-on Stone, and Wanuskewin."