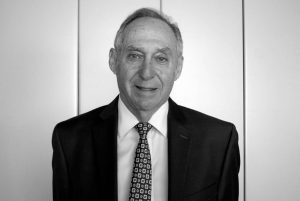 It was common practice for exhausted and famished inmates in concentration camps to fantasize about food. In his presentations to young audiences, Alex Buckman often refers to a recipe book made by his Aunt Becky during her 16 months in the Ravensbruck camp for women. Her little cookbook, constructed by stealth, contained instructions for making her specialty, Gateau a l'orange (Orange Cake).

While forced to work in a German factory, Rebecca "Becky" Teitelbaum had stolen a swath of brown paper, a pencil and a pair of scissors and hid them in her clothes. "If caught with all these stolen goods -- no questions asked -- they would have hanged her in front of all the prisoners for stealing," Buckman tells his young audiences. Back in her barracks, Becky had then cut out squares of paper and recorded her recipes from memory.

This precious bible for wishful thinking was lost once when a transport truck she was riding in was bombed--after she was liberated from the camp. Becky Teitelbaum had jumped into a ditch for safety, severely injuring her arm, and the recipe book was left on the roadside. Miraculously, it was found and returned to her four years later.

For the rest of her life, she kept it, as a prized possession, in a special bag, but she never spoke of it. Eventually, Alex Buckman found it and asked his aunt, "Why didn't you show it to us?" She didn't know why. She couldn't say. Buckman could only surmise that keeping the book out of sight, unmentioned, was part of an unconscious strategy to help her forget what she had endured.

Alex Buckman, a child survivor, was born, in Brussels, on October 31, 1939. He last saw his birth mother at age two. The sister of his father Isaac Buckman, his aunt Rebecca, would eventually become his primary caregiver, raising him as her own. When the Nazis invaded Belgium, his father paid a Catholic family to keep him safe. At age four, after Alex had been hidden successfully in various homes, he was sent to a Catholic orphanage in Namur, located two hours away from Brussels. His father made arrangements for Alex's little cousin, Annie, to be hidden there, too.

"Our last names were changed," Buckman recalls, "so that Annie and I would be known as brother and sister instead of cousins. That way, if anything would happen to our parents, at least the two of us could stay together."

Several times, when Nazi inspectors visited the orphanage, the boys were sent to hide in the cellar, where there was total darkness, and they were told to remain silent. He was given some material to stuff in his mouth to prevent him from crying out. At first, they were confused. Had they done something wrong? "From four to five-and-a-half, it happened too many times. So many years after, I still can't sleep without lights throughout the house." Hence the title for his 60-page memoir, produced as part of the Writing Lives project (2016-2017), with the recording, transcribing and editing assistance of Paulina Bustamante, Katelyn Ralph and Joey Law, is Afraid of the Dark: The Memoir of Alex Buckman.

When most of the concentration camps were liberated, Alex's circumstances were not greatly improved. "At six-and-a-half in an orphanage, nothing was that rosy," he said, during a UBC panel moderated by Dr. Ilona Shulman Spaar seventy-five years later. "We saw parents come and pick up their children and take them home, but nobody came for us. Annie was crying and wondering why our parents weren't coming and I tried to tell her that I was sure that they will come. But, like her, I didn't know why they weren't coming."

Eventually, they were sent by the Red Cross to Brussels where the names of unclaimed children were posted throughout the city. A paternal uncle found them and took them to a family that Alex assumed must be his. The same ruse was perpetrated on him by Annie's parents, supposedly for his benefit, until another cousin cruelly blurted out the terrible truth: Annie's parents were alive; his were dead. His parents had been turned in to the Gestapo and sent to Auschwitz where they were murdered at ages 31 (father) and 32 (mother). "I took a step back and, for the first time, I realized I was alone."

Buckman came to Canada at age eleven with his cousin, his uncle and his aunt, Rebecca Buckman Teitelbaum, in 1951. She had spent seventeen months in Ravensbruck. Her first four months were barely survived as an outdoor labourer, hauling wood and stones in heavy carts. Having worked in a department store in Belgium, she was able to gain a life-saving transfer to work in the office of the Siemens Factory, affording far more livable conditions at the Siemenslager sub-camp. There she was able to steal a roll of brown paper, a pencil and scissors.  Her recipes were read over and over by the women, dreaming of life before and after the Holocaust. She went on to produce two more recipe books as gifts for other women, as well as a thin volume of poems and resistance songs (on display at the Vancouver Holocaust Education Centre) and two sets of playing cards that were used Roma in the camp to tell fortunes. She died in December of 1998.


Alex Buckman left Montreal and came to Vancouver in his early 20s. In April of 2010, as a survivor-participant in the March of the Living program that brings Jewish youth to Poland and Israel, Buckman entered Auschwitz having learned both his parents were murdered there. "We finally walked in a shower room," he later told journalist Pat Johnson, "and I closed my eyes. I was thinking of my mother and her sister. We were told that the women panicked when they did not see water come down from the showers. They ran towards the walls and scratched them with their fingernails. When I heard this, I turned and caressed the wall, feeling the scratches made by Jewish women prisoners. I wondered, were those scratches made by my mother? I would never know. In that room, I finally said, au revoir, Maman."

A strong advocate for child survivors, Buckman has served as president of the Child Survivor Group at the Vancouver Holocaust Education Centre and also Treasurer of the World Federation of Jewish Child Holocaust Survivors. Orange cake is often shared when he gives his classroom presentations.

Afraid of the Dark: The Memoir of Alex Buckman (VHES 2017) 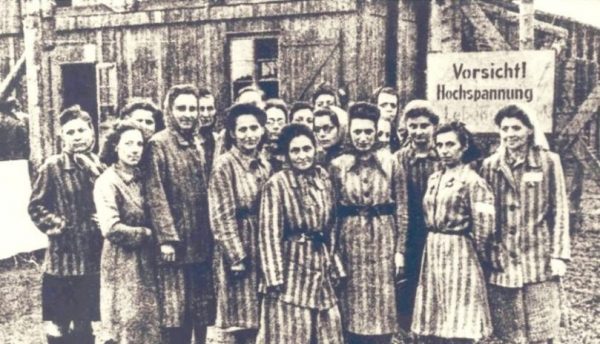 Alex Buckman's aunt Rebecca Buckman Teitelbaum survived seventeen months in the women's  prison at Ravensbruck (above). He now honours by sharing her recipe for orange cake.