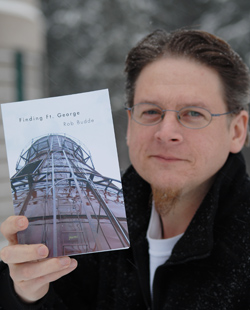 
Rob Budde of Prince George teaches creative writing and critical theory at the University of Northern British Columbia. He has been a finalist for the John Hirsch Award for Most Promising Manitoba Writer and the McNally-Robinson Manitoba Book of the Year. In 1995, Budde completed a Ph.D. in Creative Writing at the University of Calgary. He is the publisher of the online literary journal, stonestone.

The Dying Poem follows Jay Post, a filmmaker hired to make a documentary about a dead poet with only his poetry and two past lovers to guide him... Two tons of explosives are set to dismember Toronto's Metropolitan Library. The poet Henry Black hides himself in his favourite wing. When his mangled body is uncovered, there's a book lodged in his chest.

Budde's work of micro-fiction entitled flicker evolved over a 16-year period from a manuscript that started with Robert Kroetsch's creative writing class at the University of Manitoba in 1989. "Middle age sex exists as a kind of stasis," he writes, "a kind of chemical inertia. It's like knowing where the best berries grow and when to go there and you go every time and the scenery doesn't change particularly though you notice more and more. We eat our fill of saskatoons."

In 2002, Rob facilitated a collection of interviews, In Muddy Water: Conversations with 11 Poets. Finding Ft. George (Caitlin 2007) is a collection of poems about Rob's growing relationship with Prince George and Northern BC. He lives in Prince George with his partner, Debbie Keahey, and four children: Robin, Erin, Quinlan, and Anya.

Review of the author's work by BC Studies:
Finding Ft. George