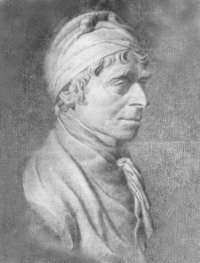 
As first lieutenant on the Discovery, James (Jem) Burney made maps of Cook's approach to British Columbia and recorded the first entrance into Nootka Sound. Describing the first British contacts with B.C., he wrote, "...in the evening, several of the larger Canoes saluted us, by making a Circuit around the ships and giving 3 Halloos at their departure. They paddle in most excellent time, the foremost man every 3rd or 4th Stroke making flourishes with his paddle. The halloo is a single note in which they all join, swelling it out in the middle and letting the sound die away. In a Calm with the hills around us, it had an effect infinitely superior to what might be imagined from any thing so simple.";

Burney first served under Cook with fifteen-year-old George Vancouver during Cook's second major voyage (1772-1775) to the South Seas. He was the brother of the English diarist and writer Fanny Burney who described Captain Cook as "the most moderate, humane, and gentle circumnavigator that ever went upon discoveries.";

In his own journal James Burney verified Cook's failure to find the opening to the Strait of Juan de Fuca and provided a detailed account of Cook's final days. It was Burney who took command of the Discovery after Cook was killed in Hawaii. After a lengthy career at sea, he retired as a rear-admiral and published a five-volume work called A Chronological History of the Discoveries in the South Seas or Pacific Ocean. Copies of his original journal are in the British Museum and the Mitchell Library, Sydney.

A Chronological History of north-eastern Voyages of Discovery, and of the early eastern navigation of the Russians (Cook is included). 1819.