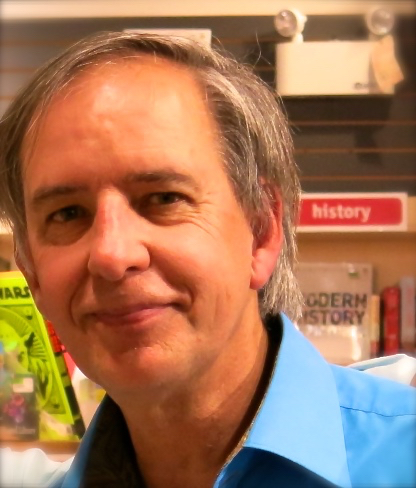 
Born in Winnipeg in 1957, Aaron Bushkowsky arrived in B.C. in 1988. He explores the relationship of a married couple to their prairie farm and one another in 'ed and mabel go to the moon' (1994), his first collection of poetry which was nominated for the Dorothy Livesay Poetry Prize in 1995. It was followed by Mars is for Poems (Oolichan) and The Vanishing Man (Cormorant, 2005), a linked collection of short stories that concerns men who undergo divorces, family death, failures and therapy in order to come to term with themselves and 'see love again'.

In Bushkowsky's Curtains for Roy (Cormorant $21) Alex is a playwright suffering from writer's block and harsh reviews. His best friend, Roy, is a theatre director with lung cancer and six months left to live. In pursuit of fresh air and great wine, they go on a road trip to the Okanagan Valley, where Roy rediscovers his passion for theatre. But when he decides to stage a production of A Midsummer Night's Dream at a winery, disaster ensues: the woman cast in the lead is the winery owner's wife and has no talent; wildfires encroach upon the surrounding forest; and Roy slips closer to death, one cigarette at a time. Curtains for Roy is billed as a hilarious and poignant peek into the world of theatre, where the greatest drama is offstage and the best performances take place behind the curtain. 9781897151747

As a playwright, Bushkowsky has twice won Jessie Awards in Vancouver for Outstanding Original Play; for The Waterhead and Strangers Among Us. The Waterhead was released as a book by Playwrights Canada Press. His play One Last Kiss premiered at the Belfry and Vancouver Playhouse Theatres in 2004.

Bushkowsky's quirky romance My Chernobyl (Playwrights Canada $16.95) won the 2008 Victoria Critics' Spotlight award for Best Professional Production and Best New Play. When a naive Canadian travels to Belarus, in order to give an inheritance to his father's last remaining relative, he meets his long-lost cousin, a beautiful, young Russian woman who views the Canadian as a ticket out of the radiation-blasted country. Cultures and ideals clash with touching and hilarious results. 978-0-88754-859-8


Anyone who has enjoyed the wisecracking tomfoolery of Steve Coogan and his fellow impressionist Rob Brydon as unlikely restaurant critics in their buddy/road movies The Trip (in northern England) and The Trip to Italy will gobble up the banter in Aaron Bushkowsky's continuously clever Curtains for Roy.

Curtains for Roy starts a bit like Withnail & I Go To The Okanagan except the dissing duo are older, semi-successful theatre types on a wine tour. Alex, a playwright with writer's block, has agreed to chaperone his old friend, Roy, a theatre director who is dying of lung cancer, on a palliative adventure.

After much imbibing and self-loathing, trading barbs and uncomfortable truths, Roy is called upon to save a crumbling production of A Midsummer's Night Dream for Kelowna's first Bard in the Vineyard presentation.

The countryside is ravaged by fires that force evacuations in the Okanagan during rehearsals-events that occurred in 2003 when Vancouver's Bard on the Beach generated a satellite project called Bard in the Vineyard, giving rise to this novel. In Bushkowsky's darkly comic Curtains for Roy the show is bankrolled by a biker-turned-vintner who has insisted his current squeeze must have a leading role.

The intimacy between Roy and Alex resembles the camaraderie that Coogan and Brydon (who aren't close friends in real life) provide in their movies. Roy and Alex are bonded by their love of theatre and a stabbingly severe frankness that reassures both parties they can be original. For good measure, Bushkowsky adds the fact that Alex once saved Roy's life when they were kids.

Nobody can dish out the truth like a close friend. It's a service, of sorts. If you have a friend tear you apart, it spares you the misery of doing it to yourself. Along the way Bushkowsky even takes veiled potshots at himself. A detested theatre critic [is there any other kind?] attacks the playwright Alex, saying, "Instead of conflict you write snappy dialogue, hoping nobody will notice how empty your stories are... The sad truth is you can't create meaningful relationships if you don't know how to have them yourself.";
Ouch.

A jaundiced but talented actor offers this disturbing rant about commercial thespianism.

"Even if we bring a little more meaning, it doesn't mean enough. People still go home after the shows and they ruin their lives with indifference and boredom. We're just a ripple in the ocean of who-gives-a-shit. We're singing cartoon frogs in a cartoon that nobody sees... We're their concept of high art, so they don't feel guilty about buying their next RV or SUV...

"What's Shakespeare to them? Old English with physical comedy. How much do they understand? How much do they really care?... They desperately want some poetry in their lives, but they don't even know what it is. So they wander down to the winery jingling their car keys, hoping we'll give them a brief glimpse of glory, a blink of insight, so their tvs don't hurt their eyes so much late at night.";

As the story unfolds, and the drama of the upcoming production becomes more important than the duo's friendship, Bushkowsky proceeds to generate more plot-driven entertainment.

Will Alex have a tryst with one of three attractive women who have crossed his path? Will Roy live to see opening night?
Will the unwanted actress rise to the occasion? Or will it all crash and burn-figuratively or literally?

There was time in this fair land when the railroads used to run.... when great fiction from a small but enduring imprint in Western Canada could be admired and widely discussed.
Curtains for Roy is perfect grist for a movie. It is a brilliant comedy of manners that deserves to be touted as a generational follow-up to Douglas Coupland's Generation X.
But these days Canada's fiction playing field is slanted increasingly back towards Toronto.

The likes of Bushkowsky and Hekkanen might as well be published from Vladivostok.
9781897151747