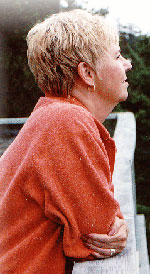 
Born in Winnipeg on April 23, 1951, Kristin Butcher came to Victoria in 1996 after a 22-year absence. A former teacher, she is the author of numerous children's books including The Gramma War, a Red Cedar Award shortlist title, and The Runaways, a Silver Birch Award regional winner. She now lives in Campbell River.

Zach & Zoe and the Bank Robber was her first title in the Zach & Zoe series. Its follow-up, Zach & Zoe: Bully and the Beagle, uses the strong connection kids have with animals to create a character who is a bully, but one her readers can empathize with and come to understand. "Children have an openness with animals and a feeling of safety that they may not have with adults or other children," says Butcher. In Zach & Zoe: Bully and the Beagle, Butcher introduces Molly Manners, a beagle who gains the affection of a human bully named Howie. "Howie is a huge bully, but it's not until his cousins, Zach and Zoe, see him petting Molly, the dog he's been constantly picking on, that they feel some empathy toward him and realize that there is a softer side to their cousin," says Butcher. "It's Howie's trust in the dog that allows him to let his guard down, show positive emotion and physically express love, which is something he wouldn't have done with the human characters in the book."

In 2014 she published Alibi (Orca $9.95) about fifteen-year-old Christine who is visiting her eccentric Aunt Maude. Maude owns an antique store and runs the town's ghost walk, so Christine gets to meet all the visitors, including a mysterious young man who knows far too much about a rash of thefts in the area. When a pickpocket targets the customers in Aunt Maude's store, Christine is determined to find out who is behind the thefts. In her search she unearths more than one surprise.

Articles: 5 Articles for this author
The Hemingway Tradition
Review


It was Shaw who found his dad after "he ate a bullet and blew half his head away."; He found the note, too. So even though Shaw and his mother are leaving Vancouver for a new start in Manitoba, the ghost of his suspense writer father is "squeezed into the front seat"; between them in The Hemingway Tradition (Orca $9.95), part of the Soundings series for teen readers.

Victoria's Kristin Butcher follows Shaw as he attempts to settle into a new school, make friends and cope with the notion that everything in his life has been a lie.

The note proves it. His father was gay. Those happy times were false. The novel they were going to write together, the hours they spent in their small boat, fishing as an excuse to share the morning, the loving husband, the devoted father, all lies.

"[My] father's death wasn't just stealing from my future; it was stealing from my past too."; Then his mother presents Shaw with a heavy leather-bound book. In reading his father's journal, Shaw finds his father's earlier, joyous entries delighting in his son and his life, then slowly giving way to rants over publishers and the state of the planet. He never wrote in the journal what was troubling him privately. Until the last entry.
As Shaw reads of his father's self-loathing, guilt, despair and portents of his final surrender, he's filled with an empowering anger. His father had killed himself because he wasn't considered normal. What was normal? And who got to decide? How stupid was that!

Certainly not the bigots at school who beat up his friend Jai. Shaw fights back with a fiery and compelling article for the school paper. His father had loved him. That was the truth. He finds that out for himself. By thinking independently of society. Was Ernest Hemingway weak for shooting himself? Or was his suicide some kind of heroic gesture in the face of illness? Shaw's Dad was no Ernest Hemingway but Ernest Hemingway was perhaps a little bit like his Dad. Human. Scared. It all depends on how you want to look at things.

Orwell said all a writer needs to write is a kitchen table. Ernest Hemingway could only write standing up and pacing the room. Kristin Butcher, a former teacher, prefers to write in her pajamas. The PJ Lady is now working on a second novel for the Soundings series, The Trouble With Liberty, for 2003. She is also the author of Cairo Kelly and the Mann (Orca $8.95) 1-55143-211-0; Hemingway 1-55143-242-0
Review by Louise Donnelly


Twelve-year-old Nick can't bear the thought of sharing his mother with her new husband and their baby which is on its way. So Nick decides to hit the streets and take refuge in an abandoned house in The Runaways (KidsCan $4.95) by Kristin Butcher. There he meets Luther and the pair form an unlikely friendship, spurring Nick to study street people for a school project.
1-55074-413-5


Is science scary? Not for Sue, Gina and Nicole, aka the Science Squad. The girls, members of CAGIS (Canadian Association for Girls in Science) use the laws of science to solve crime in Kristin Butcher's Summer of Suspense (Whitecap $8.95), the first in the Science Squad Adventure Series. Originally published on the Internet, the story includes non-fiction sidebars explaining migraines, sight and blindness, thermodynamics and other concepts behind the girls' solutions to theft at the aquarium and a mysterious fire. CAGIS, brings girls, aged 7-16, together with women working with science and technology.

Nominated for Return to Bone Tree Hill
BC Book Prizes (2010)


Did Jessica murder one of her playmates, a troubled boy named Charlie when she was twelve years old? A recurring dream forces her to ask that question. Disturbed by the vision and needing to clear her conscience, Jessica returns to Victoria, her hometown and the site of the possible crime. There she catches up with her best friend, Jilly, who confirms that Charlie did in fact go missing the week that Jessica's family relocated to Australia. But a memory-erasing bout of meningitis at the time of the incident means Jessica doesn't recall the questioning police officers, the extensive ground search, or being the last person to see Charlie alive. Will Jessica be able to acquit herself of murder or will her memory of Charlie's death remain a fear she must learn to live with? Kristin Butcher is the author of fifteen books including The Gramma War, Chat Room and Zee's Way. She lives in Campbell River.
BC Book Prizes catalogue