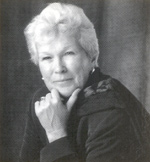 
Born in New Brunswick on April 8, 1938, Margo Button is a former high school teacher who has taught French and Spanish in Hong Kong, Chile, Lebanon and Canada. She arrived in B.C. in 1985. Her poetic memoir of losing her son Randall to schizophrenia includes three losses--first to the inner landscape of his mental illness, secondly to the streets, and finally to suicide. "I would have followed you to hell," she writes, in The Unhinging of Wings (Oolichan, 1996). It received the Dorothy Livesay Poetry Prize and was later adapted to the stage.

In a sequel, The Shadows Fall Behind (Oolichan, 2000), Button contemplates the rage she feels about her son's fate and gains some sense of equilibrium by adopting a South American child. This work was followed by The Elders' Palace (in English and Inuinnaqtun) and Heron Cliff (Signature 2007). Heron Cliff, includes Blue Dahlias which co-won The Malahat Review's Long Poem Prize and was awarded Gold in the poetry category of the 2006 National Magazine Awards. Button has an Honours B.A. from University of Toronto and an M.A. in French literature from UBC. She taught high school in Ottawa for six years and an international schools in Hong Kong, Lebanon and Chile. She has lived in Nanoose Bay, B.C. and Puerto Vallarta, Mexico.

Articles: 1 Article for this author
The Unhinging of Wings (Oolichan $12.95)
Article


"I realized something was terribly wrong with my son when he checked into a Medicine Hat police station claiming that somebody had put a corkscrew through his head and that a Nazi and a blonde woman were chasing him,"; says Margo Button.
For several years Button was mystified by her son's increasingly erratic behavior. After Randall failed his first year of university, he flew to Taiwan where he changed jobs every two or three weeks. "It just didn't make any sense,"; recalls Button. "We couldn't understand what was wrong because he had been a well behaved teenager, who graduated from high school with a B plus average.";
When Randall returned to Vancouver and started living on skid row and using street drugs, the Buttons assumed drug abuse was the culprit.
Randall had always been very articulate. He spoke fluent Spanish and conversational Mandarin. One day Randall returned to the family home in Nanoose Bay in a manic state. "He talked and talked for hours and I couldn't understand what he was saying,"; says Button. "He had the wrong endings on words and he misplaced words within sentences.";
The family's desperation was growing. The incident at the Medicine Hat police station was the turning point. Randall's father flew out and took his son to Panoka Mental Hospital. Randall was diagnosed with schizophrenia in 1989. He was 21 years old.
"I was devastated, I just couldn't believe it,"; says Button. Her debut collection of poetry, The Unhinging of Wings (Oolichan $12.95), chronicles her only son's struggle and subsequent death from schizophrenia.
Button's poems are about the pain and helplessness of watching her son, once a gentle young man with a sense of humour, slip deeper into the clutches of a terrifying illness. "I was hurting so badly. I tried to follow him into the illness; to understand it, to share it, but I finally realized that I might lose my own sanity in the process. I had to let him go.";
Five years after the diagnosis, Randall smashed his pelvis, elbow and heel when he stepped out of a third floor window. He was convinced he could walk on a beam of light. Before his feet healed, Randall had checked himself out of the hospital. He thought he could cure himself with the quartz crystal he carried in his pocket.
One month later Randall killed himself with a kitchen knife on the steps outside the family home. It was May 1994. He was 26 years old.
"Finding a suicide is a very hard thing to come to terms with,"; says Button. "It takes a long time to live with those images and not be terrified.";
When schizophrenia strikes, its victims are often young adults who no longer live at home. Young adults, like Randall, cannot be forced into treatment. "It's like living with someone you thought you knew,"; says Button. "Randall looked the same and occasionally I got glimpses of him, but most of the time he was completely withdrawn. And there was no way to reach him.";
Families are often blamed for the illness and false stereotypes abound. "While people are frightened of them, they suffer enormously at the hands of other people. They're pushed around, beaten and laughed at. Randall came home once with a shirt that said, 'Hug me, I'm a loony'. I often wondered who gave it to him. How cruel they were.";
Anti psychotic drugs help about two thirds of schizophrenics, but unfortunately medications often have very unpleasant side effects. Understandably many schizophrenics choose psychosis over drug therapy.
One in every hundred Canadians is schizophrenic, which means everyone, whether they are aware of it or not, knows a schizophrenic. Yet because of the shame and fear surrounding mental illness, it is often covered up.
"We all come in and out of minor depressions,"; says Button. "None of us are totally stable and fixed. We're all frightened of losing control. Schizophrenics represent our worst nightmare.";
Mental illness, taken as a whole, is one of the last diseases to come out of the closet. "We spend more on toothpaste research than on schizophrenia research,"; says Button. But she is optimistic that awareness is growing. The Schizophrenia Society of Canada is using Randall's story for their publicity and education campaign this year.
"Mental illness is so widespread, but nobody is willing to talk about it until someone else does,"; says Button. The foreword to The Unhinging of Wings is by UBC's Dr. Michael Smith, who donated half his Nobel Prize money to the Canadian Schizophrenia Society.
"It's known that Dr. Smith has a schizophrenic son,"; says Button. "He's a very brave man. We need more people like him - rock stars, politicians, writers and everybody - to say, 'Look, these are human beings, you needn't be frightened of them.'";
The first printing of The Unhinging of Wings sold out in two months. The title recalls a visit Margo Button and Randall made to 'Butterfly World' in Coombs, near Port Alberni, the day before he died.
"What happened to Randall is that his wings came off. He never grew to maturity, never had a family, never had a chance to fulfill his life. For me and my family, it was also as if we had come apart too. All our expectations for him went out the window."; ISBN = 0 88982 162 3