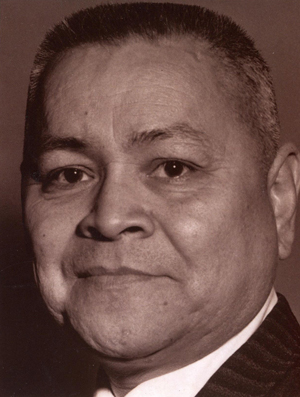 And you thought Atlin wouldn't have any literary history...

Here are ten literary connections to the town next door to Surprise, B.C.

1. We have to begin with He Moved a Mountain (Ronsdale 2013), Joan Harper's biographical tribute to Atlin's most famous citizen, Frank Calder, who was born in 1915 in the small northern village of Nass Harbour.

Calder's greatest achievement was the "Calder Case"; which he pursued to the Supreme Court of Canada, making it the blueprint for aboriginal land claims around the world.

Frank Calder founded the Nisga'a Tribal Council in 1955 and served for 20 years as its president. In 2005, four separate clans of the Nisga'a named Frank Calder their Chief of Chiefs. When he received the Order of British Columbia, the citation stated that he had "made an enormous contribution, as a peaceful warrior, as Chief of Chiefs, to the noble purpose of creating a society made up of peoples who have chosen freely to live and work together in a new relationship based on trust, respect of the land and its creatures, justice, and the rule of the law."

A long-time admirer of the work of Frank Calder, Joan Harper met Frank's wife shortly after Frank's death and gained access to much private material, augmenting it with extensive research through interviews and in the archives. Harper is a longtime member of the Canadian Federation of University Women.

2. Allison Mitchum wrote Atlin: The Last Utopia (Lancelot Press, 1989), a history of the arctic town in the northern B.C. that has been called 'the capital of the little Switzerland of the North.' Born in the north, she attended schools and universities in six provinces before settling in Sackville, New Brunswick where her husband Peter has taught at Mount Allison University. Atlin: The Last Utopia (Hantsport, Nova Scotia: Lancelot Press Ltd., 1989) was her tenth book and the fourth that is directly concerned with the north.

5. Between 1899 and 1901, work crews somehow strung nearly 2,000 miles of wire between Ashcroft and Dawson City. New York-born Bill Miller of Atlin, B.C. recalls the Yukon Telegraph--from its conception after gold was discovered in the Yukon in 1897 to its abandonment in 1951--in his Wires in the Wilderness: The Story of the Yukon Telegraph (Heritage, 2004, $19.95). The remaining wilderness trail is becoming a haven for high-powered hikers.

6. In the Yukon gold rush, 1500 people set out over the difficult overland route from Ashcroft to the gold fields in 1898. W.R. Hamilton made it and wrote about it, later published as The Yukon Story (Mitchell Press, 1964) in which Hamilton introduces the reader to death in the killer canyon, placering in perma-frost, Skagway and Soapy Smith, Atlin Camp, the Yukon Stage Line, the White Pass Route, lode mining, pioneer missionaries and poetry of the north. Former Prime Minister John Diefenbaker said of the book, "It conveys the atmosphere of the Yukon as does no other book that I have read."

7. Born in Truro, Ontario in 1865, William Henty Trewolla Olive served an apprenticeship in woodwork and architecture before travelling west to British Columbia where he worked installing the stairwells in Victoria's new Parliament Buildings. Married to a woman he had courted in England, they had four children while living in Victoria, and a fifth later. His employer Francis Rattenbury, the architect, sent him to the Yukon to build boats while founding the Bennett Lake & Klondyke Navigation Company. Olive built three steamboats. He and his family lived in Atlin, B.C. until they moved to Carbon, Alberta in 1904. There he built a school and later served as Justice of the Peace. He died in Calgary in July, 1940. His granddaughter Evelyn Johnson decided to publish his memoirs of the 'Klondyke' that he had prepared in 1939. Edited by Allan Safarik and published by Tim Lawson, the manuscript was handsomely packaged as The Olive Diary: The Gripping Tale of W.H.T. Olive's Adventures in the Klondyke of 1989 (Surrey: Timberholme Books, 1998 $26.95).

8. Born in London, England in 1912, the venerable unionist and Communist Party journalist Harold Griffin was a member of the Canadian Authors Association for 55 years. He began writing for newspapers on Fleet Street in his teens and came to Canada during the Depression in 1931, working for a year in the Atlin-Yukon gold mines and also as a reporter for the Regina Leader-Post and the Vancouver Province. He joined the B.C. Commonwealth in 1935, becoming editor of the People's Advocate. In 1942 Griffin became the founding editor of The People, forerunner of Pacific Tribune. His first published book, Alaska and the Canadian Northwest: Our New Frontier, in 1944, was a followed by a concise history of British Columbia that focuses upon labour and traces the evolution of socialism in the province. He reports that the first British Columbia branch of the Communist Party of Canada was formed in December of 1921 by militants that included William Bennett of the Socialist party and A.S. Wells of the Federated Labour party. They met in Sullivan Hall on West Cordova Street not long after the CPC was formed in Toronto at a conference on December 11-12, 1921. Griffin served as editor of The Fisherman from 1966 to 1978. His collection of archaeological artifacts is stored at SFU; his collection of Canadiana was donated to both SFU and the Vancouver Public Library. He died in 1998. A cogent socialist's perspective, Radical Roots: The Shaping of British Columbia, is his posthumous study that was issued by his wife Betty Griffin and the Commonwealth Fund, an outgrowth of the first newspaper of the CCF. Griffin is one of the unsung literary heroes of British Columbia who operated for decades beyond the conservative aristocracy based at the university. 0-9690158-8-7

9. Larry Whitesitt of Spokane, Washington began flying in 1959 and purchased a Piper J-3 Cub when he had only 15 flying hours. During the 1960s and 1970s he was a bush pilot flying de Havilland Beaver sea planes and ski planes in the Yukon, British Columbia and the Northwest Territories. In 1993 he made one last flight from Spokane, recorded on film, to Dawson City, Atlin Lake and the headwaters of the Yukon River. His books are Flight of the Red Beaver: A Yukon Adventure and Northern Flight of Dreams: Flying Adventures in British Columbia, Yukon, NW Territories and Alaska (Spokane: Marquette Books, 2004). 0-922993-2

10. Last but not least. Tim Zeigdel was born in 1963 in Montreal Quebec and he moved to Atlin where he has written at least four books including a trilogy called A Means to an End.