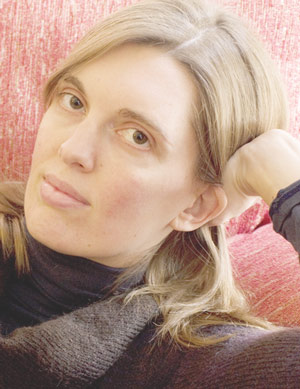 
Hannah Calder was born in the UK and moved to Canada when she was fifteen. She has lived in Barcelona, Seoul, and Vancouver prior to moving to Vernon where she teaches English at Okanagan College. Along the way she has been a social worker in Kent and a nanny in Chicago; and she has published poetry in West Coast Line, The Capilano Review and dANDelion.

After she received her MA in English Literature from Simon Fraser University in 2004, Calder moved to Barcelona and wrote her first novel More House (New Star, 2009), a work of experimental writing, much concerned with gender. "I was born without a penis," says the narrator, "... I learned to divide a room into groups--those with penises and those without--at an early age." More House was praised by Anakana Schofield as "A fusion, a collage, a bold endeavor of a literary work, a 'new' novel if you like."

Her second novel, Piranesi's Figures, is similarily investigative as she examines love among the psychological ruins of at least two marriages and one attempt at child-rearing. Again, she contorts novelistic conventions, sexual practices, and family dynamics, causing Michael Turner to blurb, "Reading Calder is to move through the world barefoot over asphalt, grass, sand and water. This is sensual, insightful writing." Her publisher describes the book as "a dense witches-brew of storytelling, a feminist-tinged fairy-tale that drapes the dirtiest secrets of domestic wreckage and illicit love in fancy dress and commands them to twirl around for our amusement."

Her Piranesi's Figures is another experimental novel that strays from a conventional narrative approach with settings in contemporary Rome, 18th century Rome, mid-20th century Margate (England), Heidelberg (Germany) and the Okanagan.

The title refers to 18th century artist Giovanni Battista Piranesi whose architectural etchings of grand buildings are peopled by decrepit humans in the foreground.

Both Piranesi and his hordes of ragged, seemingly homeless figures (representing humanity at large) appear in Calder's new novel which began eight years ago as a story about mentally ill artists.

In Calder's world of fiction there is no reality that can be relied on, anything is viable-there's always the opportunity to erase the words on the page and start the scene over.

The main characters are three sets of dysfunctional, married couples-Hilda and Jorgen, Bill and Violet, and Florence and Stephen. No one appears content in their current romantic arrangement. This leads to frequent affairs, unplanned pregnancies, abortions and miscarriages.

As Calder twists our traditional concepts of sexual practices and family dynamics, Piranesi's Figures also explores the dissatisfaction of unfulfilling employment. Hilda would rather be an artist than a nurse but she lacks the talent for it.

There are a handful of guidelines that keep the characters in check, and allow for a loosely maintained structure with the use of an all-knowing History Book that fact checks for the reality that is being written for these characters.

Meanwhile Piranesi's Figures bends time and jumps from one locale to the next, from one century to the next, as characters travel from one story into another, like passengers visiting different countries. They always return to their original story and await their fates.

If that sounds obtuse, well, that's what happens when you invent characters who know they are characters, who have their own ideas and desires and don't feel like sticking to the script. Despite their reluctance to obey the author, they are bound to act out their destinies and the whims of their creator.

The only thing these characters can hope for is that when the novel ends they could be reborn, rewritten, or borrowed and put into another tale that better suits their needs. Until then you can see them waltzing through centuries, returning to ancient Rome and then back again to the 1940s in Germany and England.

Piranesi's Figures is another bold endeavour. Hannah Calder has explored the limitations of the modern family, and the painful longing for one. Like marriage, it's not for the faint of heart.