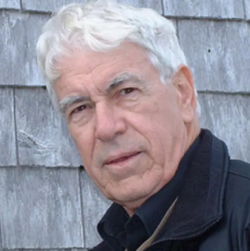 
Silver Donald Cameron's profiles of distinctly West Coast personalities, Seasons in the Rain: An Ex-Patriate's Notes on British Columbia (McClelland & Stewart, 1978), is an exceptionally varied and intelligent book about British Columbia. It includes a rare profile of publisher David Hancock and an admiring description of Hubert Evans.

Born in Toronto in 1937, he came to Vancouver with his family at age two. He mostly grew up in Vancouver except for six months in Ladner, B.C. He attended UBC for two years and taught at New Denver, B.C. For one year he was the principal at a school in Beaverdell, B.C. He completed his B.A. at UBC in 1960. He obtained his M.A. at Berkeley in 1962 and taught for two years at UBC after that. He obtained his Ph.D from the University of London in 1967 and has taught at Dalhousie, UBC and the University of New Brunswick. From 1969-1972 Cameron was one of the founding editors of The Mysterious East magazine. Since 1971 he has lived in D'Escousse, Isle Madame, in Nova Scotia, where he has been a director of Development Isle Madame Association (DIMA) and a founding Chairman of Telile, Isle Madame's community television station. He was also a Contributing Editor to Weekend magazine. He is president of Paper Tiger Enterprises Ltd. and has owned a small real estate company. In 1975 he adopted the name Silver Donald Cameron to avoid confusion with the myriad of other Donald Camerons in the country.

Review of the author's work by BC Studies:
Seasons in the Rain