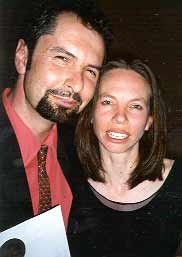 
Kicking off a new Parallax series about 'the nature of looking,' photographer David Campion and writer Sandra Shields' Where Fire Speaks: A Visit with the Himba (Arsenal 2002 $19.95) explored not only the Himba tribe that lives along the river between Namibia and Angola, but also the process of documenting the exotic 'other.' After two months with the Himba, the couple returned with the 'subtext' of their adventure. With an introduction by Hugh Brody, the book won the 2003 Hubert Evans Non-Fiction Prize.

In 2005, in association with the Planned Lifetime Advocacy Network, the couple published The Company of Others: Stories of Belonging (Arsenal), with a foreword by John Ralston Saul. Described as an "ode to the beauty of caring bonds," it documents the essential role that friendship plays in the lives of five mentally challenged people. Campion and Shields met in South Africa, married a year later and now live in Deroche, B.C. 1-55152-131-8