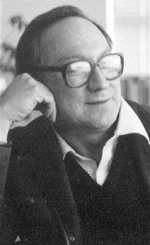 
Born in El Paso, Texas in December of 1929, Candelaria was drafted into the U.S. Army. His facility at languages led him to be stationed at Fort Bragg, North Carolina to work in Army Intelligence. There he began to write poetry. "Released from forced servitude", he studied literature at the University of Texas, Yale and the University of Missouri, gaining a Ph.D in 1959. He taught at the University of Oregon until 1965. He came to teach literature at Simon Fraser University where he founded and edited The West Coast Review until 1986. He published seven poetry books since 1978 and co-edited The Voices of Prose, Perspectives on Epic and Perspectives on Style. Candelaria met the late Stanley Cooperman (1929-1976) at university in Oregon in 1961 and edited a posthumous collection by Cooperman, Greco's Last Book in 1980. Cooperman was an SFU English professor, born in New York City, who wrote five books of poetry and one critical work before committing suicide. As the title of Chinese Chamber Music suggests, Candelaria is "seriously in love with all things Chinese."