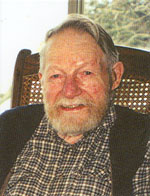 
As a child in the Fraser Valley, Al Carder stood in awe of the ancient forests, with Douglas-fir trees that commonly reached heights of more than 300 feet. Sixty years later, after retiring from a career in plant biology and having received the Canada Centennial Medal for his contributions to Canadian agriculture, Carder has documented some of the largest trees in Western America in relation to tall trees in the rest of the world in Giant Trees of Western America and the World (Harbour $26.95). He includes information and scale drawings of B.C.'s 400-foot Lynn Valley fir, the tallest authentically measured Douglas-fir ever felled, and California's Eureka Tree, a gigantic redwood. The greatest breast-high diameter of the bole of a red cedar ever recorded was 22.3 feet, that of the Ocasta Cedar felled near Grays Harbour, Washington, in 1906, and also a Sointula Cedar felled on Malcolm Island in 1923. Another western red cedar was so wide that eight men and women danced a quadrille on its stump in 1887. The tallest tree currently standing in North America is the Stratosphere Giant, a California redwood with a height of 369.8 feet. Carder previously published Forest Giants of the World, Past and Present. He lives in Victoria. 1-55017-363-4