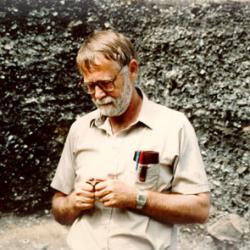 
Roy L. Carlson and Luke Dalla Bona presented the evidence for the first 5,500 years of prehistory in British Columbia, from approximately 10,500 to 5,000 years ago, in Early Human Occupation in British Columbia (1996). A concluding chapter summarizes later prehistory from 5,000 years ago to the time of European contact at which time it has been estimated there were between 200,000 and 300,000 indigenous inhabitants of British Columbia. Other estimates for mid-18th century populations of B.C. have ranged from as little as 80,000 people to as much as 500,000 people. A charter faculty member and founding chair of the archaeology department at Simon Fraser University, Carlson was the recipient of the Smith-Winemberg Award in 1995 for outstanding contributions to archaeology, awarded by the Canadian Archaeological Association.

As a leading authority on archaeological sites of British Columbia, Carlson contributed the chapter entitled 'The First British Columbians' to The Pacific Province: A History of British Columbia (SFU History Department, Douglas & McIntyre, 1996) and he edited Indian Art Traditions of the Northwest Coast (1983). The latter is a compendium of views of prehistoric art by Doris Lundy (rock art), George MacDonald (northern coast), Carlson (central coast), Charles Borden (Lower Fraser), Arnoud Stryd (mid-Fraser and Thompson) and Richard Daugherty & Janet Friedman (Ozette). These archaeologists and ethnologists had all contributed papers to an SFU symposium in 1976 called The Prehistory of Northwest Coast Indian Art. As well, three main discussion papers are included: Bill Holm's views on regional styles and forms, Wayne Suttles' opinions about Coast Salish art and Wilson Duff's argument that Aboriginal art should be considered for its purely artistic and philosophical value, not simply as evidence of social and religious standards. "Carson, summing up," writes Andrea Laforet [BC STUDIES, Autumn, 1984], "concludes that while it is possible to see in the data evidence of concern for crest development and secret societies, the themes that are probably most consistently represented are belief in spirits and shamanic curing."

Review of the author's work by BC Studies:
Early Human Occupation in British Columbia
Indian Art Traditions of the Northwest Coast