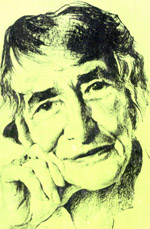 
When she died in Victoria at age 92, Gwen Cash was described as Canada's first female general reporter. She was NOT Canada's first woman reporter, but she did have a remarkable career as an independent-minded journalist for the Province, the Prince George Citizen and the Victoria Times-Colonist, among others, as well as a stint as head of public relations for the Empress Hotel in Victoria. [Lily Laverock worked for the Vancouver World as a general reporter in 1910.]

Her breezy memoir called Off The Record recalls her 65 years, off and on, in the newspaper and p.r. business. Off the Record contains recollections of Emily Carr, Doukhobors, the Anglican mission ship Columbia, celebrities and royalty who stayed at the Empress Hotel, her travels around B.C. and a noteworthy section on the occultist 'Brother Twelve'.

Born in August of 1891 in England, Gwen Goldsmid was the daughter of Howard J. Goldsmid, author of Dottings of a Dosser and leader of the leftist Young Liberal Party in England during the 1980s. She came to Canada during World War I, with her mother, to join her brother Gervas who had arrived in British Columbia in 1912 as a surveyor, but had opened a butcher shop in West Vancouver. A graduate of Stockwell Teachers Training College in London, she was surprised to discover she could not teach in Vancouver without further instruction in Normal School. "To heck with that!" she wrote. "...There must be another way of earning a living. Urged on by goodness knows what--the devil, likely--I sat down with a thick wad of nice clean paper and a soft-leaded pencil, and wrote pieces about war-embattled England, as I knew it, for the Vancouver dailies." Given that her long-dead father had been a writer, she wasn't the least bit surpised to have her work accepted for payment. As a confident freelancer, Cash soon met the 'boy wonder of journalism', Walter Cameron Nichol, then in his 50s, who owned and published the Vancouver Daily Province, the most important paper in western Canada. Nichol was a formative influence on Cash. Born in Ontario in 1866, he had worked for the Hamilton Spectator and moved to Toronto in 1887 where he had launched the original Saturday Night magazine. It failed after one issue. In 1897 he and his wife had moved to the Kootenays, then came to Victoria where he edited the weekly Province newspaper. The next year the Province moved to Vancouver as a daily and Nichol went with it. Nichol bought control of The Province in 1901. With Lieutenant Governor E.G. Prior died suddenly, Prime Minister Borden appointed Nichol to the post on Christmas Day, 1920, the only time a journalist ever served as B.C.'s Lieutenant Governor. Nichol sold the Province to the Southam family, retired in 1926 and died in Victoria.

Gwen Cash started her career as a cub reporter for Nichol on March 23, 1917 having first promised to learn how to type. She married Bruce Cash, a Manitoba, in Vancouver's Christ Church Cathedral, and went to live in Vernon where her husband oversaw an internment camp for enemy aliens known as 'German town'. They soon tried fruit farming in Naramata on a 10-acre farm Bruce Cash has bought in 1912. Cash and her husband also lived in Squamish and Sedro Woolley, Washington state. Returning to B.C., she handled publicity for the Board of Trade and the B.C. Teachers Federation. Her husband died in 1947. She always voted Socialist. In the 1970s she took NDP Premier Dave Barrett and his government to task to failing to meet her standards. Cash had a smattering of television experience, working with Mike Winlaw in Victoria to produce segments for CBC's Hourglass, but she never made a lasting impression on B.C. literary history. She once wrote a commissioned history of the Horseshoe Bay Inn in Chemainus and a little book called I Like British Columbia. In 1941, while working at the Empress Hotel at a job she thought frivolous, Cash penned a second small book about living on the West Coast. This infuriated the Head of CPR Hotels who had her fired. "I couldn't have cared less," Cash recalled. "I had cancer and was awaiting a nasty operation." Her account of Vancouver Island life while awaiting a possible attack from Japan was entitled 1,000,000 Miles from Ottawa to accentuate British Columbia's long-suffering sense of alienation.