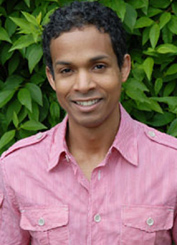 
David Chariandy lives in Vancouver and teaches in the Department of English at Simon Fraser University.

Soucouyant, his first novel, was nominated for ten literary awards including the Ethel Wilson Fiction Prize and the Vancouver Public Library's "One Book, One Vancouver" program. It was also "long-listed" for the 2009 IMPAC Dublin Literary Award, the largest and most international prize of its kind.

David Chariandy's second novel, like his first, is embedded in his Caribbean roots, but the difficult and marginal existence of his characters is fictional.

The two main characters, Michael and his brother, were born in Canada, the offspring of a doomed marriage, after their father and mother had left Trinidad, presumably in search of a better life.

The elder brother, Francis, was only three and Michael, the narrator, a year younger, when their father abandoned them, leaving his exhausted and unskilled wife to fend for herself and her sons.

The father still lives in the same city, Toronto, but the boys never see him again. Years later, when the brothers track him down, he refuses to acknowledge or see them.

The mother is too worn out for rage; she can't afford it. Travelling to her cleaning jobs and trying to keep her two boys from being toughs is all she can manage. Michael, the peacekeeper, is a gentle and generous soul who adores his sibling and who recognizes that the rage fomenting in Francis is dangerous.

They live in Scarborough, in eastern Toronto, growing up the '80s with labeling by neighbours and police as 'ragamuffins,' 'hooligans' and 'gangsters' as they raid dumpsters and slink into forbidden places to spy and explore, snowballing cars in winter and climbing trees in summer.

With no money for ice cream or comics, they're hounded out of shops and carefully watched elsewhere. One of their favourite hangouts is also their mother's, the Rouge Valley, a wild patch of nature and debris where they can play without judgment or fear, as children do anywhere.

Francis has nightmares. A bright boy, he knew how to read at seven and much to his younger brother's awe, could also read faces and keep them both safe in dangerous places. He can't, however, keep himself safe from the demon rage growing within him.

"And as Francis began to approach adulthood, he grew dissatisfied with the world and with his destined place in it,"; Chariandy writes.

By 18, Francis has been expelled from school and begins to hang out with older boys who Michael doesn't know, frequenting a fringe barbershop filled with boys supposedly known to police. This barbershop hangout and these friends, labeled as shady and 'no good,' are the most positive things in his life.

When violence explodes outside their apartment, and both boys are witness to it, the two youths are roughly picked up and taken to the police station for questioning. Even though they're innocent and allowed to go home, thereafter they're viewed suspiciously as criminal. Tired of being harassed by the police, tired of being labeled as a gangster and a thug, Francis is headed for a fall.

We see his anger when he and Michael were picked up by the police. It will erupt when he and his close friend, Jelly, are routinely dismissed when auditioning for a music contest they have worked so hard to win.

Ten years ago, when David Chariandy's debut novel, Soucouyant (Arsenal Pulp), was nominated for ten literary prizes, including being shortlisted for the Governor General's Literary award and long listed for the Giller prize, he said he already knew the plot and the title of his second book. So the incubation for Brother has been slow and very, very carefully wrought.

The story vacillates between the '80s and the '90s, when Michael is a young man, still living at home, earning, caring for his stricken mother who has yet to get over some unrevealed horror-likely something to do with Francis.

The attractive Aisha arrives, invited by Michael to stay with him and his mother while she attends the funeral of her father. She and Michael once were lovers and friends. As she re-acquaints herself with the neighbourhood that she fled years ago, she begins to get on his nerves with her insistence that there are better ways to look after his mother.

With flashbacks, we begin to learn about what has happened with Francis. He has acted aggressively, challenging the status quo even when he knew he'd pay the price in a beating, but his most unwise act was protecting his friend, instinctively, just as he has always done with his brother.

For Francis and his marginalized friends in the Toronto of the 1990s, the best redemption came from their music. This was a time when rap went mainstream, when DJs were replaced by pre-recorded tracks, when innovators and sound hounds found, assembled, and created their own mixes.

It was a brave new world and Francis and his friend Jelly were in the middle of it, working with cross-faders and equalizers to connect one style with another, across countries and across time. Their passion, their dedication and their skill, entitled them to succeed.

"I've set my novel in the early nineties,"; Chariandy, "when a group of young black men and their allies found shelter for themselves in old music and the new technologies of sound,"; he writes. He hopes, "... that my novel will help reveal how toughened young men, too often viewed as threats, have nevertheless braved great acts of tenderness and love.";


In Soucouyant we are introduced to a Trinidadian variation of the vampire. The term refers to an old woman who sheds her skin at night, flies through the air, and usually appears as a ball of fire.

During the day she might be an old woman lurking at the edge of the village, but at night-watch out-the soucouyant sucks blood from its victims.

It's a lilting word, soucouyant, but there's nothing uplifting about the story that first-time novelist David Chariandy has wrapped around its presence.
Set in the Toronto-area in the 1970s, Soucouyant is mostly the immigrant Adele's story, narrated through her son's eyes, although Chariandy tosses in some of Trinidad's history for good measure.

As a child in the Caribbean, "one morning when the sun was only a stain on the edge of the earth and the moon hadn't yet gone under,"; Adele encountered the evil presence of the soucouyant while running through the forest in Carenage. It was a premonition of the direst sort. Not long afterwards, Adele's mother became like the soucouyant.

When Adele arrived in Canada to work as a domestic ten years earlier, she was stared at, treated like a whore by the men, and made so uncomfortable that she rarely left her apartment. Then she became prone to early-onset dementia. Even though she's still a relatively young woman, she is increasingly vicitimized by cognitive deterioration that includes memory loss.

Or is the soucouyant somehow to blame? Could the trauma of that childhood meeting with the soucouyant have followed her to Canada and brought the disease on prematurely? And could this be an inherited condition?

The narrator himself appears to be one teabag short of a pot. We don't hold out much hope for his future. The father, Roger, was killed at work, leaving his two sons to cope. A monthly widow's pension enabled the diminished family to survive, but then the unnamed oldest son abandoned his mother and his doting young brother.

In the novel, both the narrator and his older brother are nameless. The latter never makes an appearance, although according to Adele's neighbour Meera he returns now and again with a little money for his mother, and once with a box of old books for Meera.

Meera is an attractive and bright young woman, probably about 18, but it's hard to know for sure, as Chariandy has a laid-back approach to time. Meera has mostly kept her distance, not wanting others to identify her as being 'like them,' the embarrassing family that lives up the block in the old house, uneducated and rough, with those two boys.

Because Meera avoided them, the narrator (let's call him X) doesn't recognize her when he discovers her in his mother's home. Initially, he thinks she's a live-in nurse, caring for his mother. X seems a little spaced himself, so it takes a while for him to figure out that a nurse would have an income, and would not have to live rough in the attic or wear clothes stolen from his drawer and closet.

Meera, in fact, has turned her back on her classes and university scholarship and her home. Her distressed mother has no idea where she is until X informs her. Compelled to move in with the abandoned Adele, Meera feels she must atone for being one of those cruel young people who had earlier harassed the immigrant family with anonymous phone calls and worse.

Meera's educated mother was also from the Caribbean, and although Meera's father is Welsh, as far as the neighbourhood is concerned, she's a 'darkie.'

At 17, X decides he doesn't want to be his mother's nursemaid anymore. He tells her he's made provisions for her, but she can't understand. What sort of provisions would leave her in a house alone, where realistically she could not have survived for more than a few days?

The abandonment is callous. It's not clear how long it is before Meera moves in to care for her, but maybe Adele's long time friend, Mrs. Christenson, has filled in the gap.

Certainly her later "bill for services rendered"; would indicate that, but details in Soucouyant are often sketchy.

The incredible neglect of Adele continues until she is killed by a preventable accident at home. Previously she has trashed the kitchen many times, disappeared outside, and run baths that have overflowed.

Are Meera and X intentionally depicted as monsters sponging off a sick woman, culpable for her death?

When there is a quarrel, Meera simply walks out on the woman who has come to depend on her, without so much as a goodbye.

Then, knowing that his mother has been wandering down to the basement, X goes to bed without securing her safety or locking the door that leads to her death.
The nightmarish outlandishness of this dysfunctional family continues. Mrs. Christenson arrives to take care of the funeral arrangemnts and presents her bill for home care for $345,033.48.

After X has sold the family home for $53,000, he allows her to bully him into handing it all over, even his brother's half.

This story disintegrates into a rant, and the characterization is not always credible, but the evocation of the soucouyant is effective and Soucouyant succeeds with its images of the Caribbean.

No doubt it was the originality of this uneven first novel that enabled Chariandy, who teaches in the Department of English at Simon Fraser University, to gain nominations for two prestigious fiction prizes.