Born in Quamichan, one of the Cowichan villages, in 1942, near the town of Duncan, respected Cowichan elder and botanical expert Dr. Luschiim Arvid Charlie began his education in early childhood, learning from his great grandparents and others of their generation. Luschiim’s Plants (Harbour $29.95) represents his dedication to the survival of the Hul′q′umi′num′ language and traditional knowledge of plants for future generations. From the healing properties of qaanlhp (arbutus) to the many practical applications of q’am (bull kelp), the information presented in this guide shares knowledge of plants that Luschiim is familiar with through his own Elders’ teachings and by way of direct experience over the course of his lifetime, and compiled from field outings and interviews with notable ethnobiologist and botanist Nancy J. Turner.

Over 140 plants are categorized within their broad botanical groupings: algae and seaweeds, lichens, fungi and mushrooms, mosses and liverworts, ferns and fern-allies, coniferous trees, deciduous trees, shrubs and vines, and herbaceous flowering plants. Each entry is illustrated with a colour photo and includes the plant’s common, scientific and Hul′q′umi′num′ names; a short description; where to find it; and cultural knowledge related to the plant. Additional notes encompass plant use, safety and conservation; the linguistic writing system used for Hul′q′umi′num′ plant names; as well as miscellaneous notes from interviews with Luschiim.

Dr. Luschiim Arvid Charlie has lived in Duncan, B.C. for most of his life. He received an Honorary Doctorate of Letters degree at Malaspina University-College in 2007 for his cultural and botanical knowledge, as well as his preservation of the Hul′q′umi′num′ language.

Five hundred feet from where I write, in the unceded and traditional land of the Snuneymuxw, a short road slopes down to a small, sheltered beach on the Salish Sea, where my partner and I often swim in summer and well into the fall. This unnamed strand is little known even by locals, and it’s rare that we share it with anyone—although this year we were frequently joined by a red squirrel, who we first noticed scolding us from a stand of green bushes at the end of the road. On closer inspection, those bushes proved to be hazelnut trees, and over the next week the squirrel grew increasingly tolerant of us, often running almost within petting reach as it transferred green nuts to a well-concealed hiding place.

We were too amused by its antics to even consider raiding the trees ourselves, which was just as well: within a few days they were completely bare of sustenance, with only a handful of husks left on the ground to show that nuts had ever been on offer.

But what if the squirrel had been inviting us to share, rather than simply warning us off?

Talking about harvesting hazelnuts with his co-author, ethnobotanist Nancy J. Turner in Luschiim’s Plants: Traditional Indigenous Foods, Materials and Medicines, Cowichan elder Dr. Luschiim Arvid Charlie has this to say: “When the squirrels start to make noise at this particular tree, it was time to go and harvest. So if you didn’t go harvest right away, in a couple of days [the nuts] would all be gone. So they found out they didn’t have to keep track of when it was ready to pick. All they had to do was keep track of the squirrels. As soon as they start to make noise there, it was time to go and pick it.”

Open Luschiim’s Plants at random, and whether you land on Charlie and Turner’s discussion of seasoning yew bows in kelp tubes, sparking an emergency fire with fir pitch, or plumping up a blanket with fireweed fluff, you’ll learn something about the world in which we live.

And you might learn something, too, about paying attention to that world.

The primary audience for Luschiim’s Plants is going to be those who love to forage for wild food. Foraging is frugal, healthy, and fun, and many of us—even settlers of European heritage—have a family history of going into the woods and fields to eat, drink or seek medicine. My English father, for instance, made a potent but noxious dandelion wine from foraged blossoms, while my Scottish great-grandmother, born in the 1860s, was the village herbalist in an age when over-the-counter remedies could do as much harm as good.

But between the resource-extraction mindset of many settlers and the rapid commercialization of “wildcrafting” it’s helpful to be reminded that wild foods and medicines are gifts, not commodities, and that they should be received both gratefully and gracefully. Turner and Charlie’s conversations, which make up the bulk of Luschiim’s Plants, are themselves true exchanges: Turner receives the gift of Charlie’s traditional knowledge, gives her own time to the task of transcribing and contextualizing his wisdom, and helps to convey some of his Indigenous worldview to us, their readers. And Charlie is a humble yet erudite teacher; unlike many self-styled experts he’s willing to acknowledge that he’s unfamiliar with how some plants are used, notes sadly that much traditional knowledge has been lost and gently cautions that some uses—in ceremony, for instance—are not to be set down in books.

Although too large to be a true field guide, Luschiim’s Plants will join Jim Pojar and Andy MacKinnon’s Plants of Coastal British Columbia (Lone Pine, 1997; revised 2016), Louis Druehl’s Pacific Seaweeds (Harbour Publishing, 2001; second edition 2016), and David Arora’s All the Rain Promises and More (Ten Speed Press, 1991) in any list of this region’s most essential natural-history reference books. It’s more than that, though: for those who have not been here for thousands of years, it’s a window into what we don’t know about our new home, its bounty, and how we can join in its stewardship. A guide to belonging, in short, and that is most welcome. 978-1550179453

Alexander Varty is a musician, writer and forager living on unceded Snuneymuxw territory. 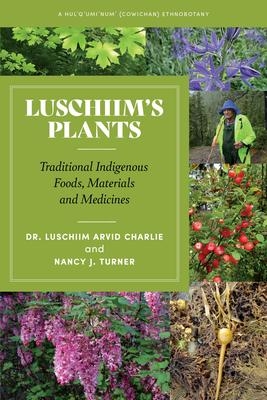