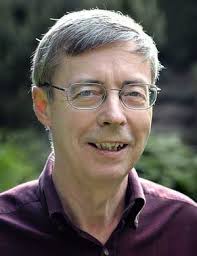 
John Cherrington was born on June 2, 1950 and raised in Vancouver but he often visited his grandparents' farm in Maple Ridge and hiked with his uncle in the Pitt Lake and Alouette Lake area in search of the legendary Slumach gold mine. During his studies at the University of British Columbia in the early 1970s, he won the Women's Canadian Club scholarship as the top student in Canadian history.

His first book was Mission on the Fraser (Mitchell Press, 1974). After graduating from law school, he moved to live on the banks of the Fraser River at Fort Langley where he became active in heritage conservation.

Married with three children, he moved to Mount Lehman and became involved with the Fort Langley Legacy Foundation.

His books include The Fraser Valley: A History (Harbour, 1992) and Vancouver at the Dawn: A Turn-Of-The Century Portrait (Harbour, 1997).

Walking to Camelot (Figure 1 2016) is about about hiking 500 km through rural England on the "Macmillan Way" footpath from Boston to Cadbury Castle, a personal pilgrimage. There are 140,000 miles of footpaths and public rights of way in Britain, many dating back to medieval times-nowhere else in the world can you walk in literally any direction over private land. At fifty-four, John Cherrington wanted a challenge; his companion Karl, 20 years older, wanted to prove he was still tough enough to complete a long-distance walk. So the pair went on a 300-mile walk from the fenlands by the North Sea, on through the enchanting, honey-coloured Cotswolds, into Somerset with its legendary Castle Camelot, to emerge at Chesil Beach on the English Channel. See Review below.

Mission on the Fraser: Patterns of a Small City's Progress (Mitchell Press, 1974)

Vancouver at the Dawn: A Turn-Of-The Century Portrait (Harbour, 1997)

Articles: 1 Article for this author
Walking to Camelot
Review 2017

"The bull follows Karl around the tree, crashing against the trunk again, but as he does so, Karl gets in one good thwack on the bull's nose...";

Does Karl escape from the bull, or is he impaled by this 2,000 pounds of snorting anger? Karl escapes.

To find out how, read Chapter 8 of John Cherrington's Walking to Camelot, the riveting story of a 365-mile hike through southern England.

John is "an out of shape solicitor"; from British Columbia's Fraser Valley. His companion, Karl, is an athletic 74-year-old ex-bantam-weight pugilist and logger of Dutch descent ("wooden shoes, wooden head, wouldn't listen";) who likes his Guinness and did half the 29-day hike with a sprained ankle.

The Macmillan Way is a series of public footpaths (Don't call them "trails";) through the heart of rural England starting in Boston, Lincolnshire, near "The Wash";, from the Fens east and south to the pastoral Midlands, over the Cotswolds and down through the chalk hills of Hardy's Dorset to the English Channel. Its 290 miles are part of a 140,000 mile network of public footpaths spreading "like veins of a body"; across fields and forests and tiny rustic villages.

A guidebook, The Macmillan Way by Peter Titchmarsh, gives directions and maps and suggestions for accommodation so that you can call ahead and reserve. There is no need to camp.

Walking to Camelot, however, is not a guidebook. It is a work of art - a richly varied verbal tapestry making intriguing patterns out of many brilliant narrative threads -- the motif of ever-changing landscapes from the dismal Fens to the gentrified limestone Cotswolds, the amusing Fawlty Towers B & B experiences, the straying where the guidebook misleads, the occasional clash between Arcadian countryside and frenetic urban life, the encounters with eccentric individuals like the oldster who insists on being buried with his dog rather than with his wife, the worrying story of Tiffany the rape victim, the historical figures of Boadicea and King Arthur, the literary allusions to The Wind in the Willows and the Hardy novels, the old buildings and startling ancient artefacts, the quaint rural customs of unknown origin, the political tension between landowners and "The Ramblers";, and, certainly not least, the lyrical tributes to a richly alive countryside loved and nurtured by the English.

Let's look at a few of the highlights, then, and see if we BC settlers can draw some useful conclusions.

The ever changing landscape dominates this hike. The beginning is ominous. "The Fens are a wild lonely place...the great flat monotony...melancholia and self-murder and heavy drinking...and sudden acts of violence."; The author alludes to Graham Swift's Waterland. I think of Stephen Leacock's satirical ghost story "Buggam Grange";. Our travelers are hit with bone-chilling rain squalls from the North Sea.

Contrast this with "the magnificent Cotswolds, a magical honeycomb of hidden valleys, softly rounded hills and quiet refined villages"; a two hour commute to London, or with Warwickshire's Shakespeare country: "...ahead of us a flock of sheep is herded by an English collie along the path. A tall elm tree stands as sentinel. The eye is entranced by endless slanting fields beyond.";

Near the end of the hike: "From the high point I marvel at the Dorset Downs and picturesque patchwork fields... the curves so graceful, the fields tidy and neat, the villages all quiet and ordered, with no sprawl.";
It's a jolt when the walk meets the motorways. "We leave the copse via a kissing gate and stand on an overpass staring down at the twelve lanes of the frenetic M1...I cannot relate to this motorway scene - it must be in some twilight zone -- and I hustle in panic to reach a spinney on the far side.";

Question: How did all those footpaths get there in the first place? Isn't it generous of landowners to allow ramblers to walk across their land? Don't you believe it! The footpaths got there because of the eternal vigilance of the common people who demanded the "right to roam"; on common land increasingly privatized since the Enclosure Movement 400 years ago. Today "The Ramblers"; spearhead the battle. They recently won a case against Nicholas van Hoogstraten who called The Ramblers "scum of the earth";, and said "This is my land and I'll do what I want with it."; Wrong answer, sir.

Madonna owns 1,130 acres in Wiltshire where she shoots birds and threatens to shoot trespassers. The court ordered her to allow public paths on 130 acres. So, you see, the fight against privatization of the commons is constant.

But the Enclosure Movement is but an instant in 2,000 years of history. The book is full of fascinating vignettes from the distant past.

The tiny county of Rutland is where the Celtic warrior queen Boadicea rebelled against the Romans in 61 AD. She was publicly flogged and her two daughters were raped by the Roman soldiers. Boadicea got her revenge by raising an army of 100,000 and burning London.

Cadbury Castle is the mythical Camelot, the court of King Arthur who defended western England against the Saxon invaders in the fifth century. The connection between Camelot and the Cerne Abbas Giant, a 180 foot statue with a 40 foot erect penis, is uncertain, but the Giant survived efforts by the Puritans and the Victorians to demolish it. The people defended it. Celtic fertility rites survive to this day in Dorset.

Yes, the reader will be captivated by the tales in Walking to Camelot and by the adventures of our courageous protagonists. Lost on the muddy paths, they are chased by Highland cattle. One B & B is a noisy brothel. They have a pleasant encounter with gypsies. They stray into a gothic celebration and are rushed out because they are thought to be "coppers";. They are charmed by the kindness of the people they meet, like the two ladies who tend to Karl's sprained ankle. They find fellowship and good food in the village pubs.

What lessons can we British Columbians take from Walking to Camelot?

Charrington mentions the "Golden Country"; in Orwell's 1984 - the life-affirming bucolic refuge from the soulless city. Here in BC, we settlers were handed a "Golden Country"; by indigenous people who had looked after it for millennia. And what have we done with it in 150 years? Shamefully, we are destroying it as we turn the land into a commodity. We're blasting mountains with open pit mining, spewing toxic waste into rivers and lakes. We're damming pastoral river valleys, creating sterile reservoirs. We're closing the forests to wanderers as we clear cut the trees.

We need to wake up.

Rutland Water reservoir flooded a wetland recently. Was a sterile mess created? No. The new five-square-mile "lake"; is a refuge for twenty thousand breeding birds. People gather there for the "Golden Country"; experience.

So, please, British Columbians, be inspired by Walking to Camelot, and let's "get ourselves back to the Garden";.

Royalties from the sale of the book in the UK are donated to Macmillan Cancer Support.