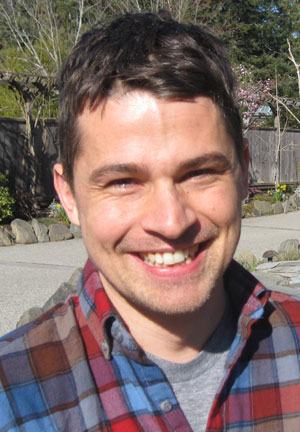 
A former skateboarding athlete and writer for Color magazine, Michael Christie of Galiano Island earned his MFA from Creative Writing UBC and laid the groundwork for a first collection of linked short stories, The Beggar's Garden (HarperCollins 2011), about disparate lives in the Downtown Eastside of Vancouver. It earned him the City of Vancouver Book Prize. It was later shortlisted for the George Ryga Award for Social Awareness in Literature, sponsored by both Okanagan College and BC BookWorld, long-listed for the Scotiabank Giller Prize, and was a finalist for the Rogers Writers' Trust Fiction Prize.

His second book If I Fall, If I Die (McClelland & Stewart 2015) is about a young boy embracing new-found freedom from his agoraphobe mother and the small house he shares with her. Life "Outside" as the protaganist, Will, calls it quickly grows complicated. When Will comes face to face with the criminal underbelly of city life, his mother must face her biggest fears and decide if she can be brave enough to save her son. According to the book's jacket cover, the story encompasses ideas about "family and friendship, overcoming fears, and learning when to protect the ones we love and when to let them fall."

Review of the author's work by BC Studies:
The Beggar's Garden

The Great Withering of 2028 has killed most of the world's trees. Global warming has created dust bowls around the world. A new strain of TB has evolved, killing many.

Ten years later, in 2038, it's the worst of times and the best of times for Jake Greenwood to be a botanist specializing in trees, a dentrologist. The few trees that are left can no longer be used for frivolities such as paper towels and books.

The division between rich and poor has become ever wider. Ragged children beg everywhere and jobs are difficult to come by. Jake has no siblings. She (Jake is a woman) hasn't had parents for many years. Her mother, who was an internationally known viola player, died in a train wreck when Jake was eight. The father Jake never met died in a work-related accident when she was three.

So begins Michael Christie's Greenwood, an unusually structured novel that uses the life rings of a tree stump as a metaphor to cover four generations of a family. An introductory illustration in the book shows the cross section of a tree trunk and its rings, which start in 1908 when the tree sprouted and when trees were plentiful. The novel timeline proceeds from the tree's outer rim (2038), goes to the core (1908), and then works its way back to the opposite outer tree rim (2038), when trees are precious.

At the chronological outset of this near-futuristic family saga, a pair of nine-year-old boys are orphaned (one of whom is Jake's great-grandfather). Two trains collide and extinguish both their parents in 1908. Left to forage on their own, while living in a shack they built for themselves, the two wild boys are named Harris and Everett by the townspeople.

Over time, the pair are known as 'the green wood boys' because they chop green wood to sell to the locals. Hence the Greenwood surname germinates. Neither marries. Harris eventually and reluctantly adopts a baby girl, Willow.

Harris is wildly successful in his ruthless exploitation of trees. Everett, however, faces a far bleaker future, sacrificing himself for his brother not once but twice. He enlists in WW1 under his brother's name because Harris had been determined to serve even as his eyesight was worsening, leading to eventual blindness. Then Everett goes to prison to serve a 35-year prison term for an alleged crime that actually never took place -- mainly to prevent some ruinous facts being made known about his brother.

Willow is brought up with every comfort by Harris but turns her back on his wealth, hating how he made his fortune, and living her whole life instead in a VW van, eventually having a son, Liam, by a drifter she never sees again.

Liam is generation three. He fathers Jake. Like the trees around them, the four generations harbour destruction within their cells: unsuccessful relationships, depression and drug and alcohol dependencies.

The connection to trees is central and ubiquitous; the book's cover, the design, and even the edge of its pages reflect the woody cross-section of fallen timber.

We are therefore reminded that the book in our hands -- unless you're on a screen -- is made from a tree. Trees sustain us. As do stories. We are all connected.

Greenwood is a bleak story about a bleak future of environmental destruction; as well as individual, corporate and governmental greed; as well as over-population and a widening gulf between the haves and have-nots. Yet somehow Christie lifts readers above all that.

Inter-generational novels are often difficult to follow, but this novel is engrossing, extremely well-crafted, cohesive and will resonate with readers. It takes a prodigious amount of research, organization, passion and skill to write such a novel.

"What if a family isn't a tree at all?" Jake thinks to herself. "What if it's more like a forest? A collection of individuals pooling their resources through inter-twined roots, sheltering one another from wind, and weather, and drought."

Michael Christie's literary debut of nine stories takes you where you've never been before-most likely-inside dumpsters and rat-infested backyard sheds. Or outside to steal a car, or buy crack in Oppenheimer Park.

In this collection we encounter a poor sod who gets stomped in the alley for the sake of his crack pipe and a 14-year-old car thief who takes off to Kelowna with the woman who picked him up at the gas station-to mention just two of Christie's all-to-real characters.

An MFA graduate of the University of British Columbia's Creative Writing programme, Christie has respected the adage, "Write about what you know."; He has worked in a Downtown Eastside homeless shelter and has also provided outreach to those with severe mental disorders.

This work experience explains why the mentally-challenged protagonist of his story Extra comes off so believably. But it doesn't explain how Christie has skillfully presented the reincarnation of J. Robert Oppenheimer, now a nattily dressed gentleman in a porkpie hat. Oppenheimer, a scientist, meets up with one of the local denizens, Henry, who, in the spirit of scholarly inquiry, requires assistance in the "procurement and consumption of crack cocaine";.

Henry in Goodbye Porkpie Hat helps his neighbour out by calling 911 whenever the neighbour ODs. Henry has one sleazy basement room in an Eastside tenement, but even then thieves break in to take his old TV and a can of butts. Henry's proud possession is a Grade 10 science text he 'dumpstered' two years ago. That's how he was able to recognize Oppenheimer when he appeared at the window.

The world as seen from the inside of a dumpster, or from behind the eyes of a crack addict, is a view worth seeing because it is often surprising. The people we meet in Beggar's Garden are surprisingly gentle, some victimized time and time again by those worse off then themselves, or simply much more intelligent.

A nameless waif on disability, in The Extra, thinks he's teamed up with a real hero, Rick, who really helps him out, while the 'landlord' above him, rents him an unserviced slab of his basement. But both men prey on the mentally challenged guy for his disability pension. In earlier, kinder times, he would have been securely living in a supervised home. Now he's out on the streets.

Not all stories in this collection are going to resonate equally. I enjoyed Christie's 'grimey-side' stories much more than his tales of a condo-owning website designer who gets a dog and finds himself a new friend besides (An Ideal Companion) or the kindly retired woman who used to work in the shoe department of Woodwards but now runs a thrift shop in the Eastside (The Queen of Cans and Jars).

Similarly, I much preferred the grandfather in Discard to the bank manager of the title story (Beggar's Garden). Somehow a widower stricken with memories of the grandson he and his deceased wife brought up and then discarded rings much truer to me than a bank manager who moves into his shed, stops going to work, creates a marketing and financial plan for a beggar, and then ultimately kicks in his front door.

But I, for one, was happy to be given the opportunity to go dumpstering without risk. I now know that dumpster has become a 21st century verb meaning to look or crawl into a large trash container for the sake of finding food, objects, or shelter.
BCBW 2001