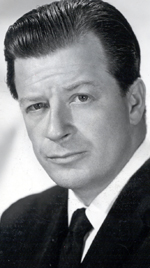 
"Jas" Clavell, better known to the rest of the world as James Clavell, lived partially at 7165 Cliff Road in West Vancouver with his wife actress April Stride from 1963 to 1972. He came to West Vancouver following the success of King Rat (1962), the first novel of his 'Asian saga'. It was written in 12 weeks, at the prodding of his wife, during a Hollywood writers' strike in 1961. It was based upon his own experiences as a prisoner-of-war in Singapore's Changi prison during World War II. Having joined the army at age 18, Clavell had been captured within weeks of arriving in Java. Clavell told Edwin McDowell, in an interview for the New York Times Book Review, that writing King Rat "was a catharsis, a purifying release of long pent-up emotions that resulted in spiritual renewal and a lifting of the terrible burden of unshared memories." Clavell wrote most of the novel Tai-Pan (1966) while he lived in B.C., but he continued writing his screenplays for Hollywood. He co-wrote the script for The Great Escape and he wrote, produced and directed the Sidney Poitier movie To Sir With Love. Clavell's novel Shogun (1975), based on the true story of a British man who became a samurai in medieval Japan, was on the bestseller lists for 32 weeks and was adapted by Clavell into a twelve-hour mini-series for television starring Richard Chamberlain. He received a $1 million advance for his novel Noble House (1981) and demanded a minimum $3 million advance for its follow-up, Whirlwind (1986), and received $5 million instead. There is a reference to Vancouver in Noble House (Chinatown's 'Pedder Street' on page 1051) but most of his work is set in Asia. Characters from King Rat and decendants of characters from Shogun have turned up in his novels Tai-Pan and Noble House. Near the start of his career in Hollywood, Clavell wrote, produced and directed a little-known film called The Bitter and the Sweet that recalls and explores the racial frictions between Caucasians and Japanese Canadian citizens after World War II. It concerns a young woman who seeks revenge for the mistreatment and internment of her family.

The imperious author James du Maresq Clavell was born in Sidney, Australia into a British military family on October 10, 1924. In 1986, Clavell published a children's book called Thrump-O-Moto (aka The Little Samurai) and his final novel was Gai-Jin (1993). He died in in Gstaad, Switzerland in 1994. He had Ph.Ds in literature from the University of Bradford in Great Britain and Maryland University.

Articles: 1 Article for this author
The Sweet & the Bitter
Press Release (2009)


When Michael Turner hosted a screening of James Clavell's The Sweet and the Bitter in December of 2009, the Pacific Cinematheque provided the following summary of the film: "In 1962, the British novelist (Tai-Pan, Shōgun), screenwriter (The Fly, The Great Escape) and film director (To Sir, With Love) James Clavell came to Vancouver to make The Sweet and the Bitter. Little known today and rarely screened, this independent film, written, produced and directed by Clavell, was one of the first dramatic features to treat the subject of the internment of Japanese-Canadians during World War II - or, more specifically here, the aftermath of those events. The plot concerns a young Japanese woman who comes to Canada seeking revenge for the injustices perpetrated upon her father, a fisherman, during the war. Focusing her quest for vengeance on the wealthy businessman she holds responsible for her father's misfortune, she sets out to seduce the man's son. The Sweet and the Bitter was the first and only film produced by Vancouver-based Commonwealth Film Productions, an early effort to establish a viable commercial film industry in the city. Financial and legal difficulties forced Commonwealth out of business soon after, and held up the release of The Sweet and the Bitter for five years, until 1967." B&W, 16mm. 87 mins.