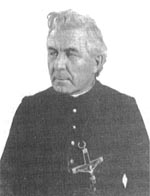 
Father Nicolas Coccola, a Corsican-born Oblate, arrived in British Columbia in 1880, five years prior to the better-known Oblate missionary Father A.G. Morice. Margaret Whitehead edited Coccola's memoirs entitled They Call Me Father with the rationale that so much attention has been paid to unorthodox and extraordinary missionaries-such as Morice, Brabant and Duncan-that the work of more typical missionaries such as Coccola has been largely obscured and under-valued. Father Nicolas Coccola was a dutiful servant of the Church, not a reformer. He stayed in B.C. for 63 years, working mainly in the Kootenays and in northern B.C., often incorporating workers from railway construction and mining crews into his congregations. In 1887, he took over St. Eugene Mission in the St. Mary's River Valley, north-west of Cranbrook, and immediately urged his Ktunaxa flock to search for rocks similar to the flecked samples of ore that he had brought with him. These were called "chikamin"; or "money rocks";. This church-sponsored prospecting eventually led to the establishment of some viable claims. Father Coccola oversaw much of the construction for a new St. Anthony Church in Fort Steele and celebrated its first High Mass on October 31, 1897. Earning the respect of the hitherto uncooperative Chief Isadore, Coccola worked in conjunction with Colonel Steele to move Aboriginals to an irrigated district around St. Eugene. He also encouraged some of the first fruit farming in the Creston area. Father Coccola moved to Fort St. James in 1905. Lizette Hall described him in her book, The Carrier, My People (1992), based largely on the recollections of her father, Chief Louis Billy Prince. "He was a man of resolute character, he said what he thought, did what he thought was right and he was right ninety percent of the time. When he made up his mind about anything, no one dared to argue or dissuade him. But he was very kind to people... before he became a priest he had intended to be a physician and trained as such. When he was among the natives not only was he their spiritual adviser but he was also their doctor.... One Winter, a Fort St. James woman from the local tribe was struck in the eye with a thorn, which must have penetrated it. This eye did not respond to treatment, and seemed to threaten the other eye, so the priest had no alternative but to remove the injured eye. The woman's other eye was saved, and caused no problems to the woman who lived a long time afterwards." Father Coccola became a director of an Aboriginal mid-wife society and once travelled to Ottawa with Babine Lake Indians to champion their fishing rights. He was responsible for the building of the Bulkley Valley Hospital in Smithers where he died in 1943. He was buried, as he requested, at Lejac, B.C. where he had served as principal of the Lejac Residential School at Fraser Lake in the 1920s.

The Missionary Oblates of Mary Immaculate was a French Roman Catholic order that decided to commence an ongoing missionary presence in B.C. in 1857 after Father Modeste Demers, the Catholic bishop of Vancouver Island and the first Oblate to work among the Carrier Indians, had arrived in New Caledonia at Stuart Lake Post and celebrated mass there on September 16, 1842, as part of Peter Ogden Skene's caravan. Bishop Louis J. De'Herbomez followed Demers to Fort St. James from Fort Alexandria in 1868. He introduced lifelong pledges not to consume alcohol or cheew tobacco, and floggings for any sexual conduct that was considered illicit by the church. Fathers Lejac and Blanchet arrived at Fort St. James in 1869, followed by Fathers Lejuene and Pandosy. "Pandosy disliked being among the natives," wrote Lizette Hall, "and said so. Ironically, it is reported he was horse-whipped by a white rancher in the Caribou, for insulting the rancher's wife." Father Adrian Morice next arrived in Fort St. James, followed by Father Coccola.