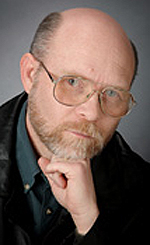 
James Coggins grew up in the small town of Waterford, Ontario and earned a B.A. in English and History and an M.A. in History from McMaster University. He moved to British Columbia in 1977, where he earned a Diploma in Christian Studies from Regent College. He returned to Ontario in 1980, where he earned a Ph.D in History from the University of Waterloo. He served as associate editor, then editor of Mennonite Brethren Herald magazine for 19 years. He now works as a novelist and freelance editor, writer and speaker. He lives with his wife Jackie and two daughters in Abbotsford.

EMPLOYMENT OTHER THAN WRITING: Magazine editor for 19 years, now a freelance editor and writer