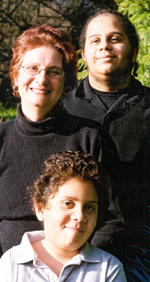 YOUR TODDLER IS PERFECT for a Huggies commercial. Your teenager could be the next Leonardo DiCaprio. Where do you start? Allison Cohee once asked herself that same question. Fourteen years later she had learned enough about the biz to create a 'how to' guide for the curious parent, Your Child in Film & Television (Self Counsel $16.95). It kicks off with a checklist to determine whether putting your child in the business is a good idea. Will your child handle missing school and using a tutor? Does your child have the self-confidence to handle rejection? Are you financially stable?
"If your motives are purely financial,"; Cohee warns, "you can end up putting pressure on your child to succeed."; Although some advice is common sense, she focuses on the 'nitty-gritty' aspects of auditioning for film and television. She provides sample call-sheets, vouchers for non-union extra work, commercial engagement contracts, a table of payment scales and a glossary.
What is a talent agency's contract cancellation policy? She explains industry-specific terms. Internet Breakdown Service, for example, allows casting directors to input criteria-like hair colour and age-and a search engine generates names of children who match that description.
Cohee's sons-Denson and Dixon-have worked in the television series Stargate, The Twilight Zone, Traffic and Dark Angel, feature films Romeo Must Die and Cheats, and commercials. Denson recently finished work on the feature film X-Men 2. Cohee's husband also works in the film industry.
Although the cover boasts 'See your child become a star!' Cohee offers sober food-for-thought. "Many parents believe they will always be saving their child's income,"; she says. "It is often difficult when you are struggling to make the mortgage payments and your six-month-old gets a $3,000 cheque.";
Her main advice is not to spend money where you don't have to. "I've heard of acting classes for three-year-olds. Some parents have given money up-front to agents. One woman spent $15,000 trying to get her four-year-old into the industry."; 1-55180-426-3