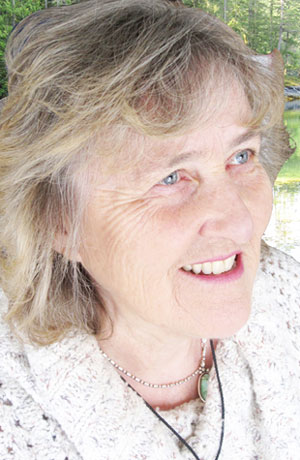 Coleman has a studio in Cowichan Bay on Vancouver Island where she also produces Limited Edition Reproductions, Art cards, Posters and Collector's Plates. Her work has been shown at Epcot Center, Walt Disney World and she was 'Artist in Residence' aboard World Explorer Cruise Lines Alaskan Cruises for a decade.


When a difficult birth crushed baby Sue Knott's skull, doctors examined the damage, then predicted that if she survived, she would be brain damaged. Baby Sue lived, and has been proving "experts" wrong ever since.

Although a top academic throughout school, she repeatedly failed English, yet became a successful writer. Skilled at drawing and painting since childhood, she excelled in art classes, then chose a career in catering. Since becoming a professional painter in the early 1980s, her work has been steadfastly snubbed by the fine art community, but the public adores it.

While still attending high school in Colechester, England, Sue met Dan Coleman, a teen aged Canadian living there with his mother. After going together for three years, they were married in 1967, then three months later left for Victoria, British Columbia.

Her husband worked with his father in building construction, then eventually started his own business. In the meantime, Coleman bore their son, David, and settled into what she calls her "happy housewife" stage. Throughout this period she painted as a hobby, mostly to decorate their home, or as gifts for friends. In 1980, a slumping economy hit the building industry and her husband was suddenly out of work. Coleman planned on taking a job then discovered that after 12 years of wanting a second child, she was finally pregnant again.

Determined to earn money by whatever means possible, Coleman thought her painting skills might provide a source of income. She approached a local recreation centre, and her proposal was accepted to teach basic painting skills to senior citizens. She also started showing and selling her own watercolours at arts and crafts shows.

"I painted anything scenery, boats, wildlife, pets, bugs. I'm still like that, I paint anything that gives me a feeling of pleasure. However, I realized that if I wanted to succeed, I had to come up with something different. Wildlife was quite popular and I loved doing it, but everybody else was doing it, too."

During one weekend show her display was set up beside Victor Norman, a native Indian carver from Sooke, B.C. Coleman became enthralled with his stories about the mysticism and mythology on which his designs were based, and by the show's end she had formed an idea. "While we were driving home, I asked Dan what he thought about putting Indian designs in the same picture with wildlife. He couldn't visualize what I meant, and told me to put it down on paper."

After doing some basic research, Coleman painted a bald eagle in combination with its totem equivalent. It was not quite what she had envisioned, but the concept was intriguing. Her second painting of a seal proved more to her liking, so she went on to produce three more watercolours over the next month.

Coleman's "West Coast native interpretive paintings" offered plenty of potential, but the time and travel involved to research the totems meant there would be little profit in selling originals. She investigated the possibility of having limited edition prints published, but neither publishers nor gallery owners were interested in dealing with an unknown artist. Especially a fair skinned blonde with a broad British accent who proposed to paint aboriginal art.

Lacking capital to print them herself, Coleman decided to sell the originals for $300 each twice her regular price. She teamed up with glass etcher Derek Wynn to rent a gallery and hold a two week show. From the very outset, her interpretive paintings attracted far more attention than she had anticipated. Coleman knew some of the potential customers would eventually return to buy the originals, but she suddenly saw an opportunity. "Not For Sale" stickers were placed on each of the originals, then she announced that orders would be taken for limited edition prints of the seal at $25 each. "I didn't have an agent or distributor to pay, so I knew that even at $25 I would make a good profit after paying for the printing."

When the show ended, there were more than enough orders to pay for the first print run. When they were finished, her customers were so impressed that many purchased extra prints to give as presents. As well, most signed up in advance for her next print.

Within six months Coleman had released three prints. Recalling her reception at the galleries, she sold only through major department stores, malls, and craft shows. "It was definitely small time," she admits, "but hey! it paid the mortgage and put food on the table, so there was no looking back."

When a small gallery opened in Victoria, Coleman relented and started supplying the owner with prints. After six months of steady sales, the gallery owner offered to pick up the expense of printing six of her paintings as art cards. Initially, gift shop managers at various hotels in Victoria were cautious about handling the cards, but their minds were quickly changed when they sold at a brisk rate.

Initially, a few native Indian accused Coleman of capitalizing on their art. Her response was that she has never exploited the native community by trying to make out she is one of them. Rather, she offers her translations of what their totems and designs represent. Coleman also points out that she was the first to introduce West Coast native interpretive art, which has since been adopted by other artists, including native Indians. Most accepted that her paintings have opened doors for them by helping others develop understanding and appreciation for aboriginal art. She takes great satisfaction that friends from the native art community continue offering advice, support, and constructive criticism, and often trade their works with her.

Coleman's work gained international recognition when Expo '86 was held at Vancouver, B.C. There, visitors from around the world were introduced and captivated by her unique blend of West Coast aboriginal mysticism and realistic wildlife.

Her successful book, An Artist's Vision, also resulted from seeing an opportunity and following through. "I go on quite a few 'cultural cruise ships' as a guest artist and lecturer the type people book in order to learn specific things. I discovered people were paying $45 to buy sets of my art cards 16 in all at the gift shop. I started thinking that if I produced a book, and did it for less than $45, they would have everything under one cover. All my research on the legends was stored on computer disks, and the artwork was already done, so it was a matter of arranging it the way I wanted it."

It took 18 months of preparation, by which time she and her husband felt sure enough about the outcome to risk publishing the book themselves. When it came off the press in 1989, the art establishment responded in a fashion Coleman had come to expect. "Nothing! It never even got a review from the local newspapers but like everything else I've done, the public spotted it and started buying it. We made most of our sales through galleries rather than bookstores, and we got our investment back in the first month. That first printing sold out within a year, and the second printing is still selling well.

"It's the public who put me where I am, not the critics. But I also recognize that I've got a great family. If it wasn't for the financial support of my parents when things were tough, and for my husband accepting anything I attempted as being okay I would never have made it.

"I wish I had more time. I've written a kids' book, but haven't had time to do the art work, and I've written a book of poetry I might publish next year." Sue Coleman paused, then laughed. "Whatever, I've still got one hell of a career ahead of me, and it's going to be fun all the way."