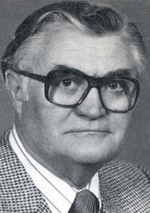 
"I say to hell with this word 'racism.' If it's racist to want to preserve your culture and tradition, then I plead guilty."; -- Doug Collins

Doug Collins was the most campaigned against author and newspaper columnist in Canada. Born in England in 1920, he was taken prisoner at Dunkirk and tried to escape on several occasions. He came to Canada after his harrowing World War II experiences simply because, "1'd met Canadian soldiers during the war and thought they were a good lot." He immigrated to Canada in 1952 and became one of the CBC's foremost journalists, bullishly tackling issues, but fell out of favour with management of Pacific Press after he switched to writing for The Vancouver Sun.

Doug Collins had a major beef with Canada's immigration trends. His little-discussed bestseller was Immigration: The Destruction of English Canada (1979). "When you get large-scale immigration..."; Collins told Vancouver magazine, "you will find there is less of an incentive to fit in with us and more of an incentive to be themselves."; His Immigration book quotes an unnamed immigration official saying "each colored immigrant eventually brings an average of 17 relatives with him."

Craving the limelight he once enjoyed at The Sun and CBC on Hourglass--a sometimes hard-edged TV news program that was the West Coast's precursor to This Hour Has Seven Days--Collins revived notoriety by making inflammatory remarks in his column's for Peter Speck's North Shore News. Baiting phrases such as 'Ministry of Turban Affairs', 'Swindler's List' and 'the inflated six million story' brought forth accusations of racism, obscuring the rest of his career, pushing him resentfully and sadly away from mainstream opinions. According to one of his few defenders, British Columbia Report, Collins' troubles were exacerbated when The Province ran a cartoon of a Nazi stormtrooper with a tattoo featuring Collins' name enclosed in a heart.

"Racism as I've said many times..."; he told Les Wiseman in 1988, "is probably the most abused word in the language. A racist according to the dictionary definition is a person who thinks he's superior to other races and thereby has a right to rule them. Well, I don't qualify. I do not think that whites are superior. I do not think that they are inferior either and I'm certain that these days very few whites have any desire to rule anyone else. Nevertheless, these words 'racist' and 'racism' are thrown about like confetti.

Collins' World War II memoir was P.O.W. (1968). In 1987 Whitecap Books published The Best and Worst of Doug Collins. His newspaper editor Timothy Renshaw called it 'a hardcover grenade lobbed into the complacent soft-centre of Canadiana.' C-FAR Books of Ontario later released a second compilation of columns, Here We Go Again!, advertised as 'a delightful Christmas gift.' Collins described it as 'an act of defiance against the censors.' The case as to whether or not Doug Collins was a hate-mongerer has been argued on Collins' behalf by Doug Christie, defense lawyer for Ernst Zundel. He died on September 29, 2001 at age 81.

He will not be missed by many, but he will be deeply mourned by a few.