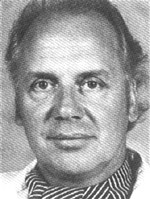 
Born in Birmingham, England, Coney has operated Porthole Press and published The Lonely Cry newsletter to publicize B.C.'s sci-fi writers. He has published more than 16 SF and Arthurian novels, such as Fang, The Gnome, King of the Scepter'd Isle and Sex and Perversion in Gnomedom?, and his books appear in seven languages. He has also written a satirical novel of the Pacific Northwest, A Tomcat Called Sabrina. King of the Sceptred Isle combines the fantasy worlds of Tolkien and T.H. White as Fang the gnome joins forces with King Arthur. He also self-published a history of the men and ships of the B.C. Forest Service back to 1911, as Forest Ranger, Ahoy! (Sidney: Porthole Press, 1983).