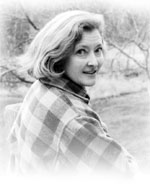 
Born and raised in south Alberta, Marlene Cookshaw now lives on Pender Island and in Victoria, B.C. Since receiving her BFA in Creative Writing from the University of Victoria in 1984, she has taught at the Victoria School of Writing and served on juries for various writing awards, including the Dorothy Livesay Prize for Poetry, the Archibald Lampman Award, the Malahat Review Long Poem Prize, BC Festival of the Arts literary scholarships, and the BC Arts Council and provincial scholarships. She has been associated with the quarterly literary journal Malahat Review since 1985 and was its editor until 2004. Shameless (2002) was nominated for the Dorothy Livesay Prize. Lunar Shift (2006) is a chronology of poems that ostensibly marches through time, from 4241 BC, the first numbered date in human history, to a hotel tryst in Room 39. Cookshaw has received the Robinson Jeffers Tor House Prize for Poetry and the Ralph Gustafson Poetry Prize.

EMPLOYMENT OTHER THAN WRITING: Editor