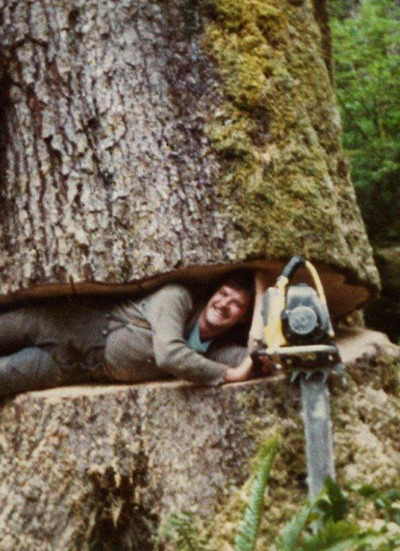 
Self-publisher Alfred Cool was born and raised in BC. He attended Simon Fraser University where he took English and Computer courses. He is a member of the Canadian Authors Association. He worked and travelled extensively on the Coast of BC for most of his life. For 26 years, as a computer professional, he lived in various northern BC communities.

Released in December of 2012, Alfred Cool's e-novel The 5 Cent Murder, set in 1973, follows a narrator who takes a chokerman job in a remote B.C. coastal logging camp. He soon realizes the company has hired work-release prisoners to fill out the full crew--including a dangerous, serial rapist. In this narrative comedy, the author captures the local color, danger and humour of those who did "run or die!"; in logging camps, culminating in a confrontation for the finale of the story.

Narrated by a gruff chokerman in a coastal logging camp in 1973, The 5-Cent Murder is in the style of Peter Trower's fiction trilogy, part of a distinct West Coast fiction tradition dating back to Roderick Haig-Brown's Timber (1942) and On the Highest Hill (1949) and going all the way back to M.A. Grainger's 1908 classic Woodsmen of the West. "There is a trick to this 'honest writing' that has to come from the blood and bone to the keyboard,"; says Cool. "I get it now-Writing stories is all or nothing. Anyone can talk about style, linguistics, components, form; not everyone has the guts it takes to write exposed and vulnerable, angry, desperate, sobbing and laughing.";

Considering his own approach to fiction, Cool says he imagines the voices of Dashiell Hammett (Grit), Mark Twain (Humour) and Zane Grey (Romance & Setting) if all three were sitting around a bar table having a few drinks. "After that," he says, "there's no controlling."

In 2013, Al Cool's story My Phantom Looks Like the Man From Glad was awarded third place in the annual Canadian Authors Association's short story contest.

BC writer Al Cool has won first and third place awards in national short story contests, has published stories in Toronto's Danforth Review and New York's The Otter e-zines, has contributed to three Canadian anthologies, and is the indie author of five auto-biographical West Coast novels. Once an English major at SFU, he has since lived as a logger, a mountaineer, a dreamer, a boxer, a programmer and Systems Analyst, a rebel, a teacher, and an environmentalist. He has worked at polished board room tables and slept in ditches as a homeless wanderer. He blogs extensively to promote green power and about nuclear energy. He brings to life through compelling and uniquely Canadian tales, as only a local can, the raw and bold characters living where Canada's mountains meet Earth's greatest ocean.

"The Pony Club"; 2014 The seemingly pastoral bliss of Noble, a small interior heartland town, explodes into scandal and outrage when the arrival of the Lipizzaner stallion show disrupts the quaint style and day-to-day living of the local Pony Club membership.

"The Hottest Place on Earth"; 2017 Is there anything more timeless in Canada than our claim to the Great White North and a young Canadian venturing there? When the great Farley Mowat went north, he found solitude in vast spaces populated with wolves. By the 70s, there was also "sex, drugs, 'n' rock 'n' roll," corruption, wolverines, dynamite, rebellion, danger, revenge, and uranium. Industrialists and Mother Nature battle it out at the Arctic Circle -- just another typical day in Canada's Great White North.

"The Haida Gwaii Detour"; 2018 Ethan moves to this most intriguing and spiritual of places on earth, Haida Gwaii. His bold story brings to life in the dazzling setting the unforgettable characters he encounters on the misty isles.