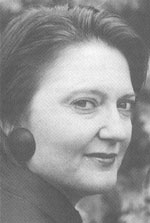 
Her silhouette romance Man of Steele, written under her pen name Judith Bowen, is the story of a 'petite' deckhand on a troller east of Bella Bella. The Richmond author says she was directly inspired by reading Edith Iglauer's Fishing with John. Corser's Paper Marriage is another romance, set in the Nicola Valley. She has published numerous other romance novels.

Articles: 1 Article for this author
Man of Steele (Silhouette $2.50)
Info


THE HEROINE OF JUDITH BOWEN'S newest romance novel Man of Steele (Silhouette $2.50) goes overboard for her man hook, line and sinker. It's a story of true love somewhere east of Bella Bella. She's a 'petite' deckhand on the troller. And he's a legendary loner named Big Mike Steele.

"I was inspired by the interesting possibilities raised by reading Edith Iglauer's Fishing With John," says Delta author Judy Corser (aka Judith Bowen). As the last member of the B.C. chapter of Romance Writers of America to make a first sale (two years ago), she says, "The romance market is getting a lot tougher but rejection by one house should never stop a really determined writer. I've found that what one house hates, another loves. And thank God for that!" Forthcoming romances from B.C. writers include Freda Vasils' Black Night, Amber Morning (Harlequin/Sept.), Judy Gill's Sharing Sunrise (Bantam/June), Catherine Spencer's Winter Roses (Harlequin/July), Naomi Horton's No Lies Between Us (Silhouette/ Aug.), Jenna Ryan's Masquerade (Harlequin/Nov.) and Judith Bowen's Paper Marriage (Silhouette/Oct.) to be set in the Nicola Vallev.