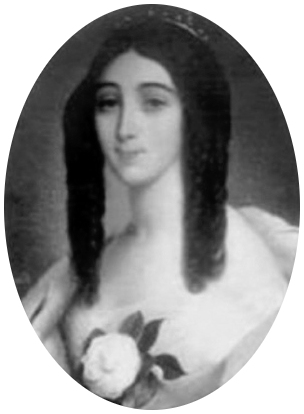 
Sophia Cracroft was born in London in 1816. A niece to ill-fated explorer, John Franklin, she accompanied Franklin and his second wife, Jane (Griffin), to Tasmania in 1836, following Franklin's appointment to Lieutenant Governor.

Franklin's expedition to find a Northwest Passage trade route ended in tragedy when his ships became icebound. The fate of Franklin and his crew remained a mystery until 2014 when a Canadian search team discovered the wreck of the HMS Erebus, one of two missing ships from the Franklin expedition.

Jane Franklin believed her husband left behind a cache of records detailing his journey. She arranged seven expeditions in search of the missing ships. Throughout their lives Cracroft and her aunt pressured the British government to find answers to the mystery of the vanished explorers.

Cracroft travelled with Jane Franklin on journeys through Alaska, the US, Hawaii, South America, Canada, China, Japan, India and Europe.

Her correspondence in Lady Franklin Visits the Pacific Northwest (Provincial Archives, 1974), edited by Dorothy Blakey Smith, provided a rare written record of colony life, from a woman's perspective, during the late 1850s.