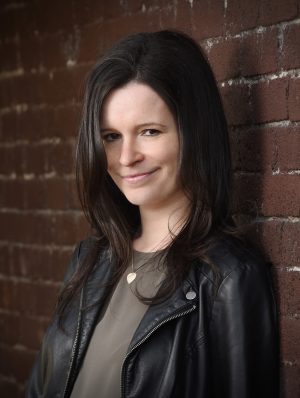 
Nanaimo-raised Jennifer Croll "could reliably be found at the library, checking out massive stacks of books that scared her babysitters... By high school, Jennifer had abandoned street hockey in favor of going to punk shows, and wore a lot of black." Now living in Vancouver she has reviewed books for Georgia Straight and edited or contributed to publications that include Adbusters, The Block, NYLON and Dazed & Confused. She has worked for online media companies and two book publishers, Annick Press and Greystone Books.

Jennifer Croll's Fashion That Changed the World (Prestel 2014) was followed by a lighter treatment of similar material for Bad Girls of Fashion: Style Rebels from Cleopatra to Lady Gaga (Annick 2016) for readers ten to seventeen. Illustrated by Polish artist Ada Buchholc, it looks at 43 women through the ages who have made an impression by dressing or looking differently--from the likes of Black Panther intellectual Angela Davis to Cleopatra and her intentional mimicry of the Goddess Isis. Other fashion standouts include Frida Kahlo, Marlene Dietrich, Coco Chanel, designer Rei Kawakubo, Bjork, Rihanna, Nicki Minaj, Vogue editor Anna Wintour, riot grrrl Kathleen Hanna and, of course, Madonna and Marilyn Monroe.