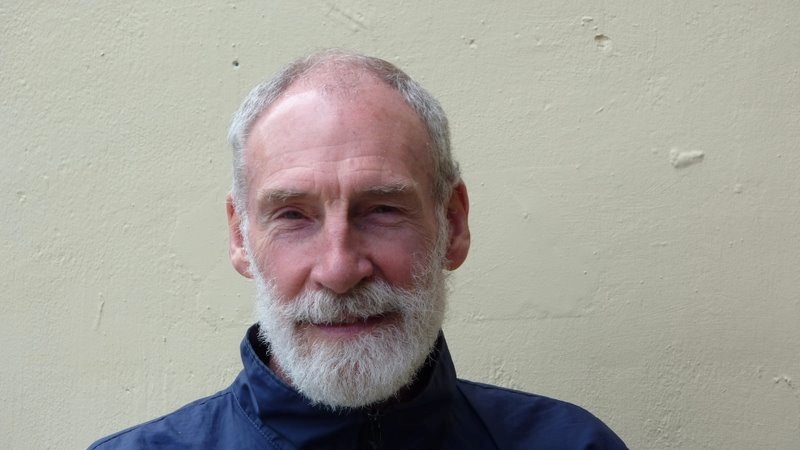 
Born in 1941, John Crouch is a retired registered massage therapist and an outstanding senior athlete.

Following the winter of 2011, when John Crouch turned 70, he celebrated in the summer of 2012 by flying to Whitehorse with his bicycle and pedalling 2,500 kilometres along six long highways back to his home in Victoria. The journey took him just over three weeks. He first crossed southern Yukon on the Alaska Highway. His memoir Six Highways to Home (Chickadee Press $20) describes meetings with people en route, as well as the beauty and rawness of the land, numerous bears and the massive devastation caused by mountain pine beetle.

Crouch is also the author of three outdoor guides for the Victoria area--for cycling, hiking and walking. Modelled on unpretentious walking guides for the Lake District of England, Crouch's self-published Walk Victoria (Chickadee Press, 2003) outlines 50 urban and suburban walks. He says it went into its second printing after only six weeks.

For ten years Crouch edited the BC Massage Practitioner and he was the founding editor of Island Runner magazine. He has summitted Mount Rainier, Mount Whitney, Mount Baker
and Vancouver Island's highest peak, the Golden Hinde. He has competed in many marathons and shorter races as a runner, winning the World Endurance Duathlon Championship in the 60+ age category in
Holland in 2001 and coming second in the 2007 event in Richmond, Virginia. Crouch won the 60+ category at the American Masters Marathon Championship in Napa, California, in 2004. He reached the podium for his age category for Ironman Canada in 2005.

John Crouch lives with his wife, Lorinda, in Victoria.

Cycling the Islands: A Guide to Scenic Routes on the San Juan and Gulf Islands (Rocky Mountain Books 2016) $20