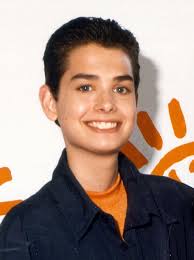 
Michael Cuccione (1985-2001) was a co-star in the MTV boy-band spoof show called 2gether. Having battled Hodgkin's disease as a child, he successfully played Jason "Q.T." McKnight as one of five actor/singers in the fictional boy band. The group also made public appearances, mostly notably as an opening act for Britney Spears. Their songs included, "The Hardest Part Of Breaking Up (Is Getting Your Stuff Back)," "Say It Don't Spray It" and "That's When I'll Be Gone." In 1998, he and his grandmother co-wrote a book about his inspiring recovery from Hodgkin's disease, There Are Survivors: The Michael Cuccione Story, compiled with the assistance of Peanut Butter Publishing in Vancouver. Not long afterwards, he died of collapsed lungs, brought on by pneumonia at age 16, in the wake of a car accident.

"Michael James Cuccione was born in Burnaby, British Columbia, Canada on January 5th, 1985, to Domenic and Gloria Cuccione. In 1994, when he was only 9 years old, he was diagnosed with 2A Hodgkin's Disease. He recovered from two bouts of the cancer, but was left with permanent damage to and around his heart and lungs due to the massive doses of treatment he received.

"He then began to go on radio, television, and made many in-person appearances at schools, hospitals and other fund raising events, to tell people who were, or had suffered with cancer and to spread the knowledge of the deadly cancer. But more importantly, to inspire other people not to give up and to remain strong. Michael even met the Prime Minister of Canada.

"He later co-wrote a book with his grandmother, "There Are Survivors." He also wrote his own music and later released 5 songs on his first CD, "Making a difference". In 1999 Michael tried out for the role of 'Jason "QT" McKnight.' Michael and 4 other guys (Noah, Even, Chris and Alex) were found and formed into the boy band spoof, '2gether.' A lot of debate went back and forth about whether all of the 5 group members were the ones that were really singing. But later it was proved to the world that all 5 guys could sing and were the ones in fact singing.

"The movie 2gether (2000) was released in February 2000 and the soundtrack to the made-for-TV movie also made Billboard's Top 100 Album Charts. In August 2000 the movie became a weekly series, airing on Mondays at 10:00pm ET, on MTV. '2gether' also released another album titled "2gether Again". A soundtrack of the 2gether: The Series (2000) show series was released in August 2000. The album, "2gether Again", also made it to Billboard's Top 100 Albums Charts.

"The boy band spoof, had made such a hit with fans that other famous singers and artists began to take notice of the group, and in the fall of 2000, 2gether went on tour with Britney Spears and was her opening act. During this time the group was also filming the 2nd season of "2gether, The Series".

"Michael began to suffer from breathing problems and had to have an oxygen tank on the '2gether' set. His breathing problems increased and he was forced to miss tapings of the show and group appearances. On December 4th, 2000, he was admitted to the hospital with pneumonia. He spent a month in the hospital, celebrating what turned out to be his last Christmas, New Years and birthday there with his family. On January 13th, 2001, his lungs collapsed and he died in Vancouver, with his family by his side, just 8 days after his 16th birthday.";

ABC News reported that Cuccione's death occurred approximately six weeks after he and his mother had survived a car accident:

"He entered British Columbia's Children's Hospital shortly after for an operation to repair his diaphragm and eventually contracted pneumonia.

"His uncle, Steve Cuccione, said the teen was expected to make a full recovery when he entered the hospital. But weeks later, he was still unable to breath without a respirator.

"His lungs were weak from the chemotherapy he endured to fight Hodgkin's disease as a child, Steve Cuccione said.";