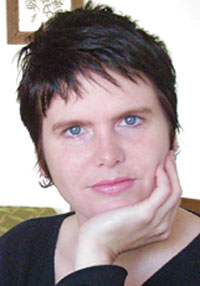 
Born and raised in Portland, Oregon, Jen Currin has also lived in Arizona, Massachusetts, Maine, New York and Colorado. She attended Emerson College, Bard College and Arizona State University. She has taught creative writing in Vancouver for Langara College and the Vancouver Film School, and online for the John Hopkins Center for Talented Youth. She followed her first book of poems, The Sleep of Four Cities (Anvil, 2005) which uses the city as a metaphor for the complexity of self, with more mystifying images and perplexing narration in Hagiography (Coach House, 2008) and The Inquisition Years (Coach House, 2010). Her work is both dazzling and obtuse. A poem called 'The Sexual' in The Inquisition Years ends: "It starts with smashing perfumes bottles on the floor, then blowing on microphones. No one wants to talk about the erotica of the absurd-but what sort of room spills wine like this? You took classes on Shakespeare & dated volunteers. She had been lying, & would continue to."; As the Talking Heads put it, stop making sense. Hider/Seeker (Anvil 2018) is her debut collection of fiction stories.

Emotional connections don’t last or are fraught with difficulty in Hider/Seeker: Stories by Jen Currin in which LGBTQ+ characters can be hiders and seekers, often both at the same time.
Currin delves into how perceptions of the self by the self and by others can deepen the already challenging situation of gender. Wisely, Currin moves into the subject with a conventional situation in the first story, “The Charlatan.” The narrator, who identifies as queer, is hurt by derogatory language used by a man at the next table in a café and politely tells him. It does not go well.

In the second story, “Up the Mountain,” Currin moves into less familiar territory. Misaki goes to a monastery and binds her breasts as she thinks only men are allowed there. She says, “I am an amateur binder and have wrapped the ACE bandage too tightly — it feels like it is binding my lungs.” She thinks of her breasts as “ridiculous” and obviously is both hiding and seeking. Her experience at the monastery is confusing. While apparently Buddhist, the monastery is rather lax, and Misaki isn’t getting the teaching she thought she would. But she does, and much of what she learns is acceptance of herself.

Misaki reappears in the final story, “Hider,” and she’s still at the monastery, which is experiencing financial difficulty. One new resident named Mark proposes opening a teashop in the city, and the commercialization of what is a spiritual quest is funny and sad. The teacher, Somchai, reacts with his customary patience to the problem, but Misaki has visions of Mark as a lizard. The symbolism is rather heavy-handed, but Currin’s stories are often more about ideas than character. And that is a conundrum, as the ideas swirl around identity. Is it to be explored, developed, or accepted? It seems that some of the characters spend more time trying to be rather than simply being, but I confess to a lack of knowledge about meditation. And I like thinking.

Frequently while reading and rereading these stories I was struck by William Carlos Williams’ assertion “No ideas but in things.” The things of these stories that stick in my mind are the incredibly smelly feet of one man at the monastery; the sex toys in “The Fox,” a melancholy tale of two needy women attempting a relationship based on sex; and a notebook in “A Snake in the Grass,” that prompts a character to remember childhood abuse. But mostly I’m struck by how the characters drift, searching for connection and commitment, sometimes self-medicating with drugs and alcohol and sex, sometimes lost in dreams or nightmares or visions, sometimes angry at what life has dealt them, sometimes passive and waiting for death. But all have been harmed in some way, by parents, lovers, siblings, even themselves. And that aspect of the stories is fundamentally realistic. Everyone suffers.

Currin’s gift lies in expressing volumes in a line or two. For example, in the extremely short (two pages) “After Halloween,” a couple separates. You know it’s irrevocable as one woman leaves: “She holds out her cheek for a kiss. I lean in for her lips. She turns her head and laughs, patting my arm.” Ouch.

Or in “Seize,” a woman named Robin visits her brother, who appears to be drinking himself to death and away from any human connection. Robin cannot help her brother, but helping people matters. On the bus she witnesses a young man having a seizure and a woman taking care of him. The tenderness shown to a stranger is inspiring.

Hider/Seeker has strong language and graphic sex. It’s firmly grounded in the contemporary Pacific Northwest, with an expectation that differences will be tolerated, if not embraced. But as shown in the opening story, that’s not what happens in real life. Currin has an important message about identity and relationships, and fortunately the latent didacticism is almost always tempered by flashes of fascinating humanity. 9781772141177

Candace Fertile has a Ph.D in English literature from the University of Alberta. She teaches English at Camosun College in Victoria, writes book reviews for several Canadian publications, and is on the editorial board of Room Magazine.

Articles: 1 Article for this author
The Sleep of Four Cities by Jen Currin (Anvil Press $15)
Review


Sometimes a traveler, exploring a foreign city, experiences a disorientation that no map or guide can shake. The choice then is to assiduously pursue an understanding of the layout and ambience of the place or to abandon attempts at orienting oneself and just keep walking and noticing, without a route, just taking it all in. Reading Jen Currin's poems, one is faced with a similar choice: the first leads to drudgery and dead-ends. The second, the only viable option, is to keep reading, abandoning any expectation of linear sense.
In The Sleep of Four Cities, you can let Currin's language take you down alleys, over bridges and through gates, without a destination, and you are overtaken by surprise and variety. You may not be able to say where the poems took you but you were certainly taken. I traded my spirit for a handful of nails. / Bliss pinched my elbows. / The stars climbed back upon the roof/ and the sky said, "hurt me.";

Currin's poems have the accessibility of dreams which require relinquishing paraphrase. In this debut collection there isn't a single predictable line or image. One can detect certain obsessions: Clouds / moon / light / wind / water and fish / ponds / rivers / wells. There is a stubborn disconnect between the titles and the individual poems and no congruity between poems within each of the four sections. If connection is to be located in this elusive writing it has to be personally constellated by the reader. That's true for all art but in these kinds of poems it's imperative and also the reason why many readers say they don't "get"; contemporary poetry. The plethora of striking images, many surreal, is anchored somewhat by Currin's use of conventional punctuation and format. After all that dissonance, a puzzled reader is grateful to come upon a recognizable landmark. Some poems, different ones for different readers, will remain behind locked gates. Some will give up secrets reluctantly while others will open wide vistas in memory and desire. Call these inaccessible or, alternately, toss out the nostalgia for interpretive closure and just go for the adventure. "Yesterday on the pier I saw a ship with five sails. I saw another with none. I turned back to my book. when I looked up, the sail-less ship had blossomed-two handsome triangles fluttered, white as nursery bed sheets. And as I sat there, the wind read the book rapidly, with no regard for rhyme."; 1-895636-70-1