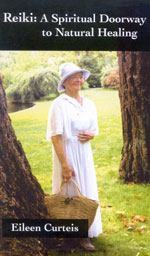 
Born and raised in Victoria, BC, Sister Eileen Curteis entered the Congregation of the Sisters of Saint Ann in August 1961, at age nineteen. For 27 years, she was involved in education as an elementary teacher and also principal for eight years. She subsequently delved into the eastern healing art of Reiki as a Christian teacher and practitioner of it and continues in that healing ministry today. Eileen is also the producer of three films and seven CDs.

As a point of interest, she is related to the Curteis family after whom Curteis Point takes its name near Sidney.

Sister Eileen's Reiki I and II Manuals and her Advanced and Reiki Master Manuals have been published in both English and French. (CBC Publishing, 2011 and 2018 for French translation).