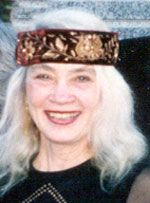 
An inspirational literature instructor and former school librarian in North Vancouver, D'Acres grew up in the prairies with Ukrainian heritage. She arrived in B.C. in 1970. She co-created the first B.C. writers directory, Starting Line-up, for North Vancouver schools in 1989, helped co-produce the B.C. Book Prizes and she co-founded the George Woodcock Centre for the Arts and Intellectual Freedom Fund at UBC. With Donald Luxton she co-authored Lions Gate (Talonbooks, 2000), a history of Vancouver's most famous bridge. It became the 'winningest' B.C. title of the year. Nominated for the Bill Duthie B.C. Booksellers' Choice Award, it received the Lieutenant-Governor's Medal for History from the B.C. Historical Federation, selected over runners-up Cougar Annie's Garden and the Historical Atlas of B.C. and the Pacific Northwest. The bridge bio has also received the City of Vancouver Heritage Honour Award, the West Vancouver Heritage Achievement Award for Excellence and the Heritage Society of B.C. Award of Outstanding Achievement. Lilia D'Acres lives in West Vancouver.

Review of the author's work by BC Studies:
Lions Gate


As the Golden Gate Bridge epitomizes San Francisco and the Eiffel Tower is synonymous with Paris, the Lions Gate Bridge is a death-defying construction of Vancouver's collective imagination. "Perhaps in your city,"; writes Douglas Coupland, "there is a structure so potent and glorious that its existence in your mind becomes the actual architecture of your mind-a structure through which all of your dreams and ideas and hopes are funneled. In my city, Vancouver, there is one such structure, a fairy-tale bridge called
Lions Gate Bridge...

"I figure I have driven across the bridge maybe five or six thousand times in my life-that's all the way from Vancouver to Halifax and back-and never in all of those miles have I once tired of the view, endlessly renewing, endlessly glorious... Here is Lions Gate Bridge, one last gesture of beauty, of charm and grace before we enter the hinterlands...";

Coupland's mystical, almost hallucinogenic reverence for Lions Gate Bridge is placed at the outset of Lilia D'Acres and Donald Luxton's Lions Gate (Talon $29.95). Reminiscent of Michael Ondaatje's In the Skin of the Lion and Mark Helprin's Winters Tale, fantastical novels that celebrate bridge building, Coupland makes a joyous and grand statement on par with the audaciousness of the bridge itself.

"This is what I figure: if there is a heaven, and if heaven has a bridge to take us there, then surely that bridge is Lions Gate Bridge. And this bridge is ours.";

Lions Gate Bridge was first envisioned in 1890. Prior to World War One many believed a bridge to West Vancouver via Stanley Park would be an unsightly imposition and serious alternative plans to build a tunnel were made as early as 1894.

In 1925, a low-level Second Narrows bridge was built to North Vancouver, kick-starting North Shore expansion. Not to be outdone, West Vancouver offered two million dollars of tax land- the British Properties-in exchange for a viable bridge.

The little-known story of how a Vancouver industrialist and engineer named A.J.T. Taylor went about single-handedly attracting British capital to finance the bridge is at the heart of Lions Gate, a coffee table history for visitors and locals alike.

As the son of an impoverished entomologist and lay minister, Fred Taylor was born in Victoria in 1887. His formal education ended at age 14 and two years later he was at the Vancouver Ship Yards earning five dollars per month as an apprentice. In those days he lived in a rented CPR shack near Hastings and Burrard.

A good marriage, hard work, British connections, good luck, fearless ambition and visionary risk-taking led Fred Taylor straight to the top, literally to the penthouse suite atop of the Marine Building, from where he could look down at the still-standing CPR shack in 1933.

To develop West Vancouver real estate, Lord Southborough, Fred Taylor and a retired British banker named W.S. Eyre established British Pacific Securities in 1928. Lord Southborough was able to obtain the support of Rupert Guinness, the second Lord Iveagh and one of the ten richest men in the world, because Guinness had visited Vancouver in 1917.

Taylor's efforts to build a bridge were enhanced in 1930 when a shipping accident knocked out the existing Second Narrows Bridge, stranding hundreds of cars on the North Shore and plummetting the District of North Vancouver into receivership.

Simultaneously, British capital was keen to escape high taxes and to take advantage of Depression labour. West Vancouver agreed to part with 4,000 acres of mountainside and the Guinness family, chiefly Rupert Guinness and his two brothers, agreed to finance the Capilano Golf Course, sewers, roads, water lines and a school site.

The provincial government approved bridge construction in 1933 but Canadian Prime Minister R.B. Bennett-consistently the villain of the piece-refused to grant assent. Bennett remained in cahoots with rival developers, the CPR, and resisted all of Fred Taylor's diplomatic and technical arguments.

Taylor hosted the Guinness delegation in 1934, feeding them fresh-caught salmon at the Vancouver Club and taking care to provide imported Irish whiskey-because none of the Guinness party drank stout.

Lord Southborough was finally able to convince his old friend William Lyon Mackenzie King to grant federal approval to Taylor's initiative in 1936, after Mackenzie King had defeated Bennett in 1935.

The construction of the Lions Gate went absurdly well, ahead of schedule, under budget, overcoming many technical challenges and only blocking shipping for one hour in total. The main span is 472 metres with a ship's clearance of 61 metres. Trucks exceeding 13 tonnes are now prohibited. The bridge was opened for less than six million dollars in 1938 (emergency repairs in 1979 would cost eight million).

Just as workers and engineers had placed all their spare change, amounting to 35 cents, at the bottom of the first steel footing, Taylor placed personal mementos, including a pair of his baby shoes, inside one of the lion statues. After Taylor died of cancer in New York, his wife spread his ashes from the centre of Lions Gate Bridge in 1945.

Today Fred Taylor is only recalled by the thoroughfare leading to the British Properties, Taylor Way, but his dogged determination and shrewd ambition built the Lions Gate Bridge as much as cement and girders.

The British Columbia Toll Highways and Bridges Authority acquired title to the bridge in 1955 for five-and-a-half-million dollars; but tolls would not be removed until 1963, thereby allowing the provincial government to recoup its costs.


The longest suspension bridge in the British Empire was embellished by two Art Deco sculptures of lions, made by Charles Marega. These guardians were unsubtle reminders that the Lions Gate Bridge was a symbol of empire, built by English capital.

No such reminders were needed by the Squamish Indians. In 1936, without consultation and little compensation, the Minister of Indian Affairs recommended transfer of lands from Capilano Indian Reserve No. 5 to the First Narrows Bridge Company, pursuant to Section 48 of the Indian Act.
Three years later, when King George VI and Queen Elizabeth became the first English monarchs to visit Canada, they drove over the Lions Gate Bridge to 'honour it'. The Squamish requested the royal entourage stop at Capilano Road to receive gifts and to present their own queen, Mary Agnes Capilano.

She was the first-born daughter of the marriage that had united two previously warring tribes, the Yaculta and the Squamish. Mary Agnes Capilano stood on the roadside, in full ceremonial regalia, with Chief Joe Mathias, who had attended the coronation of King George VI in 1911.

The royals didn't stop. As well, nobody from the Squamish Band was invited to partake in the honouring ceremony. "This was the only time that we could present my grandmother to the Queen,"; recalled Chief Simon Baker, "but the car drove past us... It was terrible for my grandmother.";

In a condescending letter, the Honourary Secretary of the Vancouver Committee for the Reception of Their Majesties reassured the Squamish their gifts were sent to Buckingham Palace.

"We can assure you that every effort was made to fulfill the wishes of Their Majesties and had they desired to stop, it would have, of course, been done. We are assured that Their Majesties took particular pains to acknowledge the homage of their Indian subjects, and that in passing them the rate of speed was considerably lowered.";