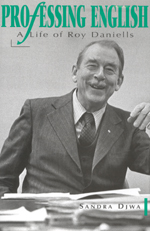 
The semi-legendary Roy Daniells died in 1979, disliked by some, revered by many. Sandra Djwa's biography of Daniells was awarded the Lorne Pierce medal for biography from the Royal Society of Canada. Roy Daniells was a very influential figure in the small and easily controlled literary firmament of B.C. during the 1950s and 1960s. He helped or influenced the writing careers of Earle Birney, George Woodcock, Margaret Laurence, Eric Nicol, Roderick Haig-Brown, Adele Wiseman, Sheila Watson, Margaret Avison, Eli Mandel, Phyllis Webb, Daryl Duke and Joy Coghill--to name a few.

After Garnett Sedgewick, a discriminatory autocrat, ruled the roost at the UBC English department from 1920 onwards, Roy Daniells took over in 1948. "We are suffering the benefits of Democracy after 25 years of Benevolent Patriarchy,"; acidly commented Earle Birney, who was beholden to Daniells in the 1950s and resented his ascendency. An egocentric poet, Birney tried to undermine the new Head, sometimes with success, spreading rumours he was a homosexual. Whereas Sedgewick was a (sometimes aggressive) homosexual who had lived with his mother and resisted change, Daniells was a 'puritanically conscientious' poet and biographer who modernized the department. Under Sedgewick the UBC English Department had segregated first-year classes by gender until 1941, the last remaining UBC faculty to do so. The careers of Sedgewick and Daniells spanned approximately 50 per cent of the history of the department. The sometimes bitter rivalry between Birney and Daniells was documented in Sandra Djwa's Professing English: A Life of Roy Daniells (University of Toronto Press, 2002) and it was touched upon in Djwa's published address called Professing English at UBC: The Legacy of Roy Daniells and Garnett Sedgewick (Ronsdale, 2000).

Born in London, England in 1902, Roy Daniels immigrated with his family to Victoria in 1910. He gained his B.A. from UBC in 1930, continued his studies at University of Toronto (M.A., 1931; Ph.D, 1936) and served as head of the Department of English at the University of Manitoba until he came to teach at UBC in 1946. A specialist in Milton, he became the head of the English Department at UBC in 1948 and retired in 1974. He received the Lorne Pierce Medal in 1970 and was made a Companion of the Order of Canada in 1971.

Roy Daniells authored two volumes of poetry and wrote extensively on Canadian literature. He also wrote Alexander Mackenzie and the North West (Great Travellers Series, London, Faber and Faber, 1969). He headed the committee that hired George Woodcock to serve as the first editor of Canadian Literature and laid the groundwork for UBC's Creative Writing Department, for which Earle Birney is generally accorded most of the credit. It was Daniells who encouraged his colleague Stanley Read to persuade UBC President Norman MacKenzie to allocate funding for Canadian Literature during a round of golf. According to biographer Sandra Djwa, "It was very much Daniells' project and supported by the English department... Daniells also acted as a behind-the-scenes literary advisor to Woodcock up to the Seventies."

Review of the author's work by BC Studies:
Alexander MacKenzie and the North West