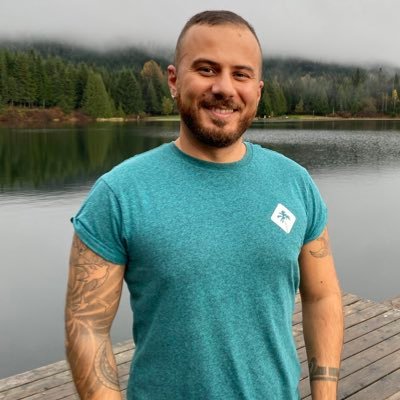 
Former Syrian refugee Ahmad Danny Ramadan of Vancouver is a journalist with bylines in the Washington Post, The Guardian and Foreign Policy. His history of working with organizations in the Middle East as well as his personal experience as a refugee have made him deeply involved in volunteerism, democracy, social justice and LGBTQ refugees' rights. In 2016, he was Community Outreach Coordinator of QMUNITY, British Columbia's Queer Resource Centre, as well as Grand Marshal for Vancouver's Gay Pride Parade. Prior to his first novel, he had published two collections of short stories in Arabic.

The Clothesline Swing, Danny Ramadan's first novel in English, draws inspiration from Arabian Tales of One Thousand and One Nights, as two lovers lament their separation from Syria. From the mountains of Syria, in the aftermath of the Arab Spring, the characters describe journeys through the valleys of Lebanon, the seas of Turkey and the heat of Egypt before reaching Canada. Hakawati, a storyteller, tells fables to his dying male partner. Meanwhile Death, a looming character in a dark house, shares a house with the two men, eavesdropping on their secrets. The Clothesline Swing won a gold medal in the IPPY Awards LGBT+ category, is a finalist for a Lambda Literary Award in the gay fiction category, was a nominee for the Ontario Library Associations' Evergreen Award and was longlisted for the 2018 edition of CBC's Canada Reads.

Ramadan followed up with the children's picture book, Salma the Syrian Chef (Annick Press $21.95). From the publisher: "All Salma wants is to make her mama smile again. Between English classes, job interviews, and missing Papa back in Syria, Mama always seems busy or sad. A homemade Syrian meal might cheer her up, but Salma doesn't know the recipe, or what to call the vegetables in English, or where to find the right spices! Luckily, the staff and other newcomers at the Welcome Center are happy to lend a hand -- and a sprinkle of sumac. With creativity, determination, and charm, Salma brings her new friends together to show Mama that even though things aren’t perfect, there is cause for hope and celebration. Syrian culture is beautifully represented through the meal Salma prepares and Anna Bron's vibrant illustrations, while the diverse cast of characters speaks to the power of cultivating community in challenging circumstances."


The Clothesline Swing describes a series of escapes to reach freedom in Vancouver.

Ahmad danny ramadan had two collections of Arabic short stories under his belt, Death and Other Fools (2004), and Ary (2008), when he was among the first wave of 1,300 Syrian refugees who arrived in Canada in 2014.

His first book in English was a translation of texts by Saudi Arabian blogger, Raif Badawi, who was lashed for his criticisms of Saudi Arabian society, 1000 Lashes: Because I Say What I Think (2015).

An activist for refugees and LGBTQ communities, Ramadan served as grand marshal for last year's Vancouver Gay Pride parade and his fundraiser, Evening in Damascus, raised $80,000 to assist Syrian refugees to come to Canada.
His first novel in English, The Clothesline Swing, is reviewed here by Cherie Thiessen.

"One of the dearest memories i have of my childhood,"; says Ahmad Danny Ramadan, "is when I snunk onto a neighbouring rooftop and cut down the clotheslines and used them to build myself a swing on my family's balcony.

"It didn't last for long, and it fell down within days, but I really felt proud of it. It was always a joyful memory of mine that I built something out of something entirely different.";

The clothesline in Ramadan's novel is a symbol that reflects one of the few times the sun got through; it's a slice of his past life that sustains him. The clothesline swing is a refuge for his deeply troubled mother, and a reminder that life can be idyllic.

"On the balcony,"; recalls the narrator Hakawati, "my father built her a swing using old clotheslines and an abandoned pillow... every morning my mother sat on the pillow...enjoying the warmth of the sun as it filled Damascus with life...She used to pick me up in her arms in the early afternoon hours, sit me on the clothesline swing and push me higher.";

Life becomes a nightmare for Hakawati (Arabic for storyteller) when his mother becomes bi-polar. Scars from these abusive years will never fade. The love between his father and his mother fades. His mother's illness grows and his father's interest in the family dwindles until he is rarely there, leaving the narrator to endure years of fear for his life.
After Hakawati unsuccessfully runs away, his father takes him to his grandmother's home where he comes to love her as a surrogate parent. His grandmother manages to squeeze enough affection out of her already busy family life to sustain her grandson.

From an early age the beleaguered youth has been attracted to males. As a 15-year-old, his coming-out is brutal. After he suddenly blurts out to his father that he's gay, he is locked in his room and routinely beaten by his father who is deaf to the grandmother's entreaties.

The grandmother eventually helps him escape. He commences a peripatetic life: begging on the streets, working in a sandwich shop. In Egypt, he finds employment and friends-he thinks-until he is attacked and beaten almost senseless after they learn of his homosexuality.

Meanwhile Hakawati begins a sheltered life with a lover who is in a secure financial position. After two years, this begins to feel more like a prison than a loving relationship.
Then the storyteller returns to Syria where he finds employment at a newspaper. Surrounded by friends, he creates a life largely fueled by parties, promiscuity, alcohol and drugs.

In this violent and dissipated world, he meets the love of his life through a dating website. He convinces this new love-known only as The Listener-to come with him to Beirut to get away from the violence, fear and torture of the Syrian Civil War.

A chance on-line meeting with a Canadian who wants to help fuels his plan for a final exodus to North America.
His entire life can be viewed as a series of escapes from violence.

On their grueling journey towards freedom, Hakawati tries to keep up the spirits of The Listener much as Scheherazade did in One Thousand and One Nights.

Just as Scheherazade told interesting tales so that the sultan would spare her life, the storyteller is keeping his partner alive with 17 stories of his past, their shared memories and of a dying Syria.

No personal names are ever given. The third main character in the story is Death.

"There are many stories in the novel that reflect and mirror my own experiences,"; Ramadan told BC BookWorld, "and others that I sewed together from the stories I know of, or heard through friends and family members.

"Hakawati has some of my insecurities and represents the very real abandonment issue that I realize within myself.";
This is a story of modern Syrian refugees that takes us far deeper than news reports of tearful, welcoming hugs at airports.