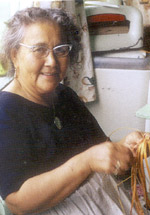 
Florence Davidson has been credited with reviving the tradition of making button blankets among the Haida in the 1950s. She made her first button blanket in 1952 to console herself after her family lost their possessions in a house fire. She also made traditional woven baskets and hats. As a revered conduit for tribal culture, Davidson frequently collaborated with ethnologists, filmmakers and anthropologists including Margaret Blackman with whom she co-authored an autobiography, During My Time: Florence Edenshaw Davidson, A Haida Woman (University of Washington Press, 1982). Having been one of the last Haida women to undergo the traditional puberty seclusion and an arranged marriage, Davidson provided her biographer with keen appreciations of female roles in Haida society, revelations about menopause and widowhood, derived from approximately 50 hours of tape recordings. A revised, enlarged edition appeared in 1992.

Born in Masset on September 15, 1896, Florence Edenshaw Davidson was the daughter of renowned artist Charles Edenshaw and the grandmother of artists Reg Davidson and Robert Davidson. Also related to artist Albert Edward Edenshaw, she was married at age 14 to logger, fisherman, trapper and carver Robert Davidson Sr., a hereditary chief of the town of Kayung. They had 13 children including Claude Davidson, a carver and the chief of the village of Masset, father of Reg Davidson and Robert Davidson. Partially as a tribute to Florence Davidson and other elders, Nancy J. Turner completed Plants of Haida Gwaii (Sono Nis, 2004), an ethnobotanical study of the Queen Charlotte Islands that Turner began with her first visit to Haida Gwaii in the early 1970s with her husband Robert D. Turner. Some of Nancy Turner's information on plants was gleaned directly from Florence Davidson, who invited her to attend her 95th birthday celebrations. Florence Davidson is depicted on the cover of Turner's book in a photograph by Robert D. Turner showing her removing cedar bark from a red cedar in preparation for weaving. Florence Davidson, who greeted Queen Elizabeth at Sandspit in 1971, died in Masset in December of 1993.