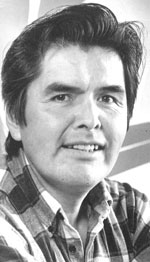 Born in Hydaberg, Alaska, on November 4, 1946, and raised at Masset on Haida Gwaii, Robert Davidson is the son of Claude Davidson, a carver, and grandson of Robert Davidson, Sr., a carver and a hereditary chief of the town of Kayung. He is also related to legendary Haida carvers Charles Edenshaw and Albert Edward Edenshaw through his grandmother Florence Edenshaw. As one of B.C.'s most successful Aboriginal artists, Robert Davidson has had his work as the subject of Robert Davidson: Eagle of the Dawn (1993), edited by Ian M. Thom in conjunction with a major exhibit at the Vancouver Art Gallery, as well as Eagle Transforming: The Art of Robert Davidson (1994).

Davidson moved to Vancouver in 1965 and apprenticed for 18 months with Bill Reid after Reid discovered Davidson conducting a carving demonstration at a Vancouver department store. When he carved his first totem pole in Masset in 1969, it was the first to be raised in Masset for more than 90 years. Davidson has since erected poles in New York, Dublin, Montreal and Toronto. He supplied a pole for the headquarters of Maclean-Hunter in Toronto and the Pepsi Cola company commissioned three poles called Three Variations on Killer Whale Myths in 1986 for its international sculpture park outside New York City.

Multi-talented, Davidson has worked with argillite, gold, silver and wood, carving masks and making jewellery, when not undertaking monumental works. His forays into abstractions resulted in a UBC Museum of Anthropology exhibition called Robert Davidson: The Abstract Edge in 2004. Nine years later The Abstract Impulse was mounted for the Seattle Art Museum and the National Museum of the American Indian in New York, resulting in the publication of The Abstract Impulse (SAM 2013) with text by Seattle's Barbara Brotherton and Sheila Farr, and John Haworth, director of the New York City branch of the NMAI. It features paintings, sculptures and prints created since 2005. Davidson also made the talking stick that was presented to Pope John Paul II in Vancouver in 1984.

Based on Robert Davidson’s childhood experiences, Jigging for Halibut with Tsinii and Learning to Carve Argillite both feature a young boy learning important traditions from Elders. The Sk’ad’a (the Haida word for “learning”) series showcases the importance of inter-generational learning in preserving Indigenous traditions and highlights the role of Elders.