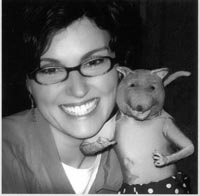 Born in Manitoba and raised in the Rocky Mountains, first-time author Gillian Davies of Courtenay grew up in a house full of unusual pets, from snakes to raccoons, an experience she found useful in creating the dapper, urbane and charismatic character of Robertson Rat. Grant Leier, who lives in a whimsical garden setting with his family in Ladysmith, brings whimsy aplenty to Davies' exuberantly detailed Robertson Rat (Ekstasis / Cherubim $24.95). His multi-layered, richly patterned illustrations, originally created for a solo show, playfully introduce Robertson who "dabbles in this and dabbles in that"; as a rat of many talents. Robertson Rat is a sailor, a poet, a philosopher. He's a snappy dresser, a skillful juggler, a collector of candlelabras, sumptuous tapestries and rare ginger jars. He sews, he cooks, he dances. And he has a message for young readers: Never be afraid to dream. 1-894800-53-2
--by Louise Donnelly