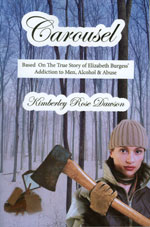 
Kimberley Rose Dawson's self-published, print-on-demand memoir is her life story as an alcoholic as told through a character named Elizabeth Burgess. Kimberley Rose Dawson is a pen name for Rosyln Mooy, who has been sober since 1981. She plans to contine her narrative with a memoir related to her recovery.

The title of the memoir, Carousel, refers to the way the character of Liz has felt trapped for many years on a rotating carousel, repeating patterns of abuse, eventually taking refuge in alcoholism. Forbidden to see her true love Edmund, she is coerced into marriage by her mother to Brian, a low-life who leaves her with three babies and a house full of rats. Her rescuer Norm victimizes her once more, and her next Prince Charming named Lenny leads her further into despair. The story that is all-too-real, edited for the author by Clelie Rich. "Carousel is written as a novel," says Mooy, "not as a self-help book and so contains stories of romance, family life, birth, death, struggle and triumph."

EMPLOYMENT OTHER THAN WRITING: Paper Carrier