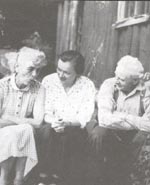 
Beth Day's 1956 visit to the home of Jim and Laurette Stanton on Knight's Inlet resulted in her 1957 book Grizzlies in Their Backyard, later condensed by Reader's Digest. The Stantons were in their Seventies when the book was written. They had abandoned city life for Knight Inlet in June of 1919, travelling up the 90-mile inlet in a rowboat powered by a 21/2 horsepower motor. At one time four grizzlies slept within 100 yard of their cabin. Laurette Stanton died in Alert Bay in 1961. Jim Stanton was living in Cultus Lake. Born in 1924, Beth Day Romulo moved to the Phillipines. Her book was reprinted in 1994 by Heritage House.