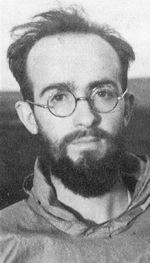 
Raymond de Coccola (1912-1995) spent the latter half of his religious career as a priest of St. Michael's parish in Burnaby for 28 years. In 1937, at his own request, even though he spoke no Eskimo nor English, Father de Coccola was sent to live among the Eskimos of the Canadian Central Arctic. With Paul King, he co-wrote Ayorama, illustrated by James Houston. Ayorama describes the years de Coccola spent in the Bathurst Inlet region among the Krangmalit. Later it was reissued as The Incredible Eskimo: Life Among the Barren Land Eskimo, whereupon it was reviewed favourably in the New York Times. De Coccola was able to 'think outside the box'. "My formal education," he wrote, "had been regulated by seemingly medieval tradtions, established by frustrated old men in Rome's high places, apparently with little inkling of the basic needs and longings of the human soul."