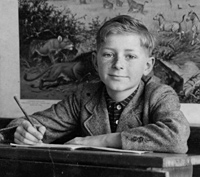 
Having self-published a how-to book for yachting enthusiasts, Buying the Right Boat, and two travel books on the Caribbean, No Shoes Allowed and Gone to Come Back, Dutch-born Jan de Groot of Langley wrote his memoir of the German occupation of Holland, A Boy In War (Sono Nis 2008). He writes for De Krant, a Dutch newspaper distributed around the world to Dutch emigrants. 978-1-55039-167-1 $13.95

The Riddle of the Raven (Sono Nis, 2011) is de Groot's memoir about a 140-foot sailboat (specifically called a 'gaff-rigged ketch') that he purchases to provide sailing adventures to under-priviledged children. Built in 1920, the boat turns out to be haunted by the ship's original owner, who was crushed to death between the ship and the dock.


Partially inspired by letters written by his father from a concentration camp, Jan de Groot has reconstructed his life as a resourceful and resilient child during the Nazi occupation of Holland for A Boy In War (Sono Nis $13.95).

Born in 1932 in The Hague, de Groot still vividly recalls the May day in 1940 when German troops, "their black boots pounding on the pavement,"; rounded up Dutch soldiers and loaded them onto trucks.

He was a coddled seven-year-old, protected by a doting older brother, until he was suddenly forbidden to play with his friends in the surrounding woods, off-limits due to barbwire and land mines.

Secrets grew. Motorcycles were confiscated but his father's beloved Harley-Davidson was hidden in Jan's bedroom. A downed English-speaking pilot was hidden in their house until he could be spirited away to Switzerland.

While the family's second-floor apartment becomes a "safe house"; for Jews and others hiding from the Nazis, the family must maintain a façade of normality. For his eighth birthday, Jan receives a gleaming, brightly varnished kano, a Dutch kayak-like boat, built at his grandfather's northern shipyard.

His brother, twelve years older and a gifted artist, alters ration tickets that allow them a little extra food and his mother insists Jan continue with his piano lessons. Then suddenly his father is betrayed and arrested.

While the family waits for sporadic letters that let them know Jan's father is still alive, Jan uses his birthday boat to steal German corn from the plowed-under soccer fields. He also rigs a dynamo and bicycle headlamp to the footboard of a treadle sewing machine and provides reading light when there's no electricity.

Having had the Gestapo search their home more than once, Jan's mother realizes they must leave the city, so Jan and his mother set off for the north with its large farmlands, hoping to gain shelter from relatives. Mostly traveling by foot, they take their direction from the sun and sky, and Jan is terrified that he will never see his father again.

Jan de Groot immigrated to Canada in 1957 as a merchant mariner. He contributes to the Dutch newspaper De Krant, writes for boating magazines and has self-published a how-to book for prospective yacht owners, as well as two books about his sailing adventures in the Caribbean.