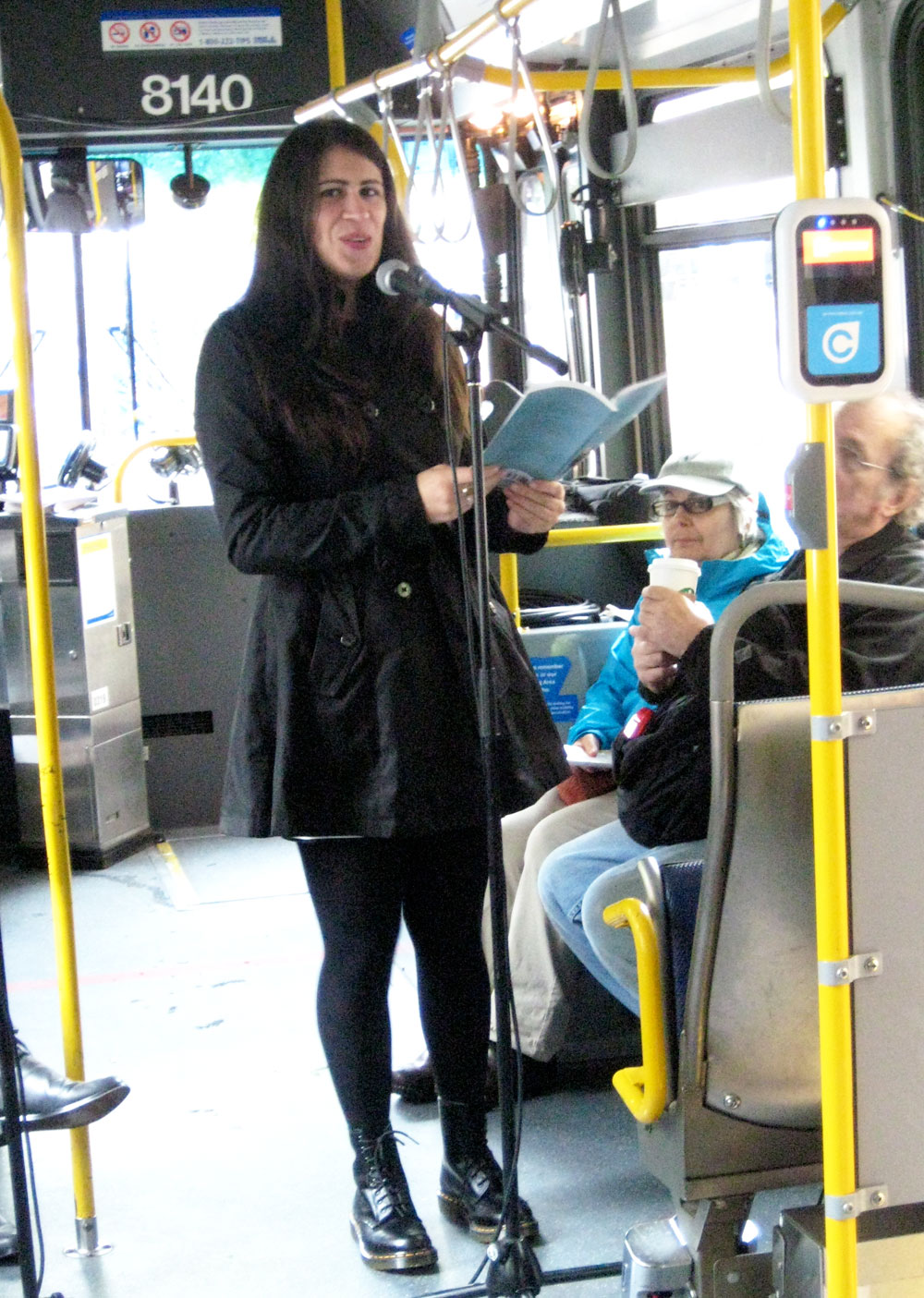 
With an MFA in Creative Writing from UBC, Dina Del Bucchia has written a monthly column for Canada Arts Connect and created her own one-woman show "Not a Shiksa." She has been a finalist for the 2011 RBC Bronwen Wallace Award for Emerging Writers.

According to her publisher, Talonbooks: "Dina Del Bucchia was born in the Trail Regional Hospital and grew up in the small village of Fruitvale, B.C. She spent much of her formative years watching all manner of television and most of her working life has been spent in bookstores, both independent and big box. She holds an MFA in Creative Writing from the University of British Columbia. She writes a monthly column for Canada Arts Connect magazine, and her writing has appeared in literary publications across Canada, and as art in Old Friends' exhibition, Funny Business. She is a literary event coordinator and host, performed a one-woman show at the 2005 Vancouver Fringe Festival, and has appeared at comedy events around Vancouver. She has taught creative writing to children and teens at the Vancouver Public Library and as part of the Vancouver Biennale's Big Ideas program. Del Bucchia was a finalist for the 2012 RBC Bronwen Wallace Award for Emerging Writers. She lives in Vancouver."

Described-or perhaps prescribed-as an antidote to a dating culture complicated by texting, meet-up apps and pervasive images in the media, Rom Com (Talonbooks $19.95) by Dina Del Bucchia and Daniel Zomparelli skewers the universal appeal of romantic comedies with 25 "humorous yet heartbreakingly honest" poems about modern love "steeped in nostalgia, sex, homoeroticism, race, consent, and popular culture--from irreverent verses exploring All the Places to Meet the Love of Your Life to Matthew McConaughey's rock-hard abs." This co-written collection asserts that the romantic comedy movie genre has had an overall damaging influence on contemporary conceptions of love. Featuring paper doll cutouts of each author on the book's flaps, Rom Com combines a playful and sassy approach with serious criticism, "poking fun at our tendency to hold out for Mr. or Mrs. Right."


Women hammer against the plastic ceiling of their ordinary lives in Dina Del Bucchia’s collection of fifteen stories, Don’t Tell Me What to Do. They chafe, they subvert and they channel their resentment in peculiar and often destructive ways.

These characters are like exasperating friends. You want to give them advice, knock it into them. Sometimes you question why you’re friends with them at all, given that many of the characters are not that likeable.

These women and situations ring familiar, then hit you with subversive notes. Another writer would have her female character striving to create a beautiful green space in a concrete jungle, nurturing greenery as, you know, women do, but in the opening story Val—whose grown son sends her gardening magazines and whose long-divorced husband was outsmarted by the lawn voles—has different ideas.

A woman from the Neighbourhood Enhancement Committee hounds Val for the sorry state of her yard, but Val decides lawns were originally for rich people. “They had servants to fluff up their shrubs.” So she wages a one-woman war against the hypocrisy of lawn care, a war that has deeper, more personal roots.

The same subversion is at work in the titular story “Don’t Tell Me What to Do,” told in the first person by a woman named Alex, who criticizes her lover Robert: “He knows I hate… being treated like a child, being told what I should do.” We sympathize; but then again, Alex, if you don’t want to be treated like a child, don’t be with men old enough to be your Dad. Black and white boundaries are blurred by booze, entitlement and an unresolved past.
There are several disturbing tales of excess. In “Miss Supreme” we meet Sashay, the five-year-old, small-town beauty queen whose desperate-for-perfection mother Linda is bizarre at best, exploitive at worst, using vacation money to buy “a set of perfect teeth to fit over missing baby teeth and new grown-up ones.”

In “That Beautiful Feeling,” Pamela’s over-gifting leads to escalating consequences, all in a desperate attempt to make her dull office a better place, and to be liked, because, let’s face it, she is not that likeable. You sympathize with her cohorts. They’re just plugging away at their ordinary lives, and here comes Pamela with the grand gesture, a thoughtfulness that is impossible to reciprocate.

Like the mother Linda in “Miss Supreme,” Pamela risks debt and ruination in the drive for perfection. I belong in a bigger story, she might be saying. But here I am, and I will make your lives hell instead.

In “Nest,” a pet-home architect gets a commission from a strange, wealthy woman to make a nest for a wild bird. Meanwhile, the architect’s wife desperately wants a baby of their own. As the architect becomes obsessed with creating something truly extraordinary, she becomes less and less interested in filling her own ordinary nest.

A young woman, Nat, crashes funeral services in Del Bucchia’s “In Cold Cuts,” loading up ziplocks with deli meats while the mourners mourn. She drags her boyfriend along, reasoning that “he was made for funerals, so quiet, solemn, respectful. A real suckhole.” Can we root for her? Should we?
Bingo-loving sisters Shirley and Mary Beth’s admirable friendship after years of child raising and marriage suggest that bonds forged in resentment and betrayal are just as powerful at those forged in love. The title “Under the I” refers to selfishness as well as to women under the neon sign for the bingo hall “who hold their Craven A’s like daggers.”

In the final story, “The Gospel of Kittany,” beautiful young Kittany becomes an internet sensation through The Light, a sinister devotional cult dedicated to beauty and superficiality. The exploited Kittany exploits herself, then exploits her followers in turn. Exploitation is a circle, not a one-way street.
Del Bucchia’s language is wry, precise and fierce. These are complex, compelling and masterful stories. 9781551527017

Claire Mulligan is a creative writing teacher at the University of Victoria and Camosun College. Her novels are The Reckoning of Boston Jim and The Dark.