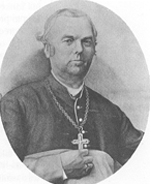 
"The Rev. Mr. Demers was as fine a litterateur as he proved to be a devoted priest." -- A.G. Morice, The History of the Northern Interior of British Columbia

In 1871, The Missionary Companion on the Pacific Coast was published in Montreal by Rt. Rev. Modeste Demers with the help of Most Rev. F.N. Blanchet and Rev. L.N. St Onge. It was a Chinook dictionary with catechism and prayers.

Demers is generally considered the first Roman Catholic to preach in the Fraser Valley. After a six-month journey, he reached the Columbia region in 1838, travelling overland from the Red River with Oblate Father Norbert Blanchet. He gained the dubious distinction of being the first priest to conduct Mass on the B.C. mainland. Demers came to Fort Langley in September of 1841 and received a cannon salute. "The welcome that Mr. Yale extended to me," he wrote, "was such as would be expected by a man of merit and distinction. Five or six hundred savages instantly surrounded me and I had difficulty getting out of their midst to enter the Fort." Demers proceeded to baptize 15 children, then 700 Indians. He taught hymns and the sign of the cross. "All these natives had forgotten their hatreds and their projects of vengence," he enthused, "to come to listen to the Holy Word." He introduced the ritual of confession while distributing trinkets and tobacco.

Born on October 11, 1809 in St. Nicolas, Quebec, Demers, a gifted linguist, was ordained in 1936. After visiting the Fraser Valley in 1841, he reached the Okanagan Valley in 1842 and Victoria in 1847. He became the first Bishop of Vancouver Island where he imported a printing press and started the colony's third newspaper, Le Courrier de la Nouvelle CalÃ©donie, in September of 1858. He also recruited the Sisters of St. Ann and helped them open their school in Victoria. The first four Sisters to arrive in April of 1858 were Sister Mary of the Sacred Heart, Sister Mary Lumena, Sister Mary of the Conception and Sister Mary Angele. Demers died in Victoria on July 21, 1871.

Demers, Modest & F.N. Blanchet. Notices & Voyages of the Famed Quebec Mission to the Pacific Northwest. Being the correspondence, notices, etc. of Fathers Blanchet and Demers, together with those of Fathers Bolduc and Langlois. Containing much remarkable information on the areas and inhabitants of the Columbia, Walamette, Cowlitz and Fraser Rivers, Nesqually Bay, Puget Sound, Whidby and Vancouver Islands while on their arduous mission to the engages of the Hudson Bay Company and the pagan natives 1838 to 1847. With accounts of several voyages around Cape Horn to Valparaiso and to the Sandwich Islands, etc. Englished out of the French by Carl Landerholm. (Portland: Oregon Historical Society, 1955).