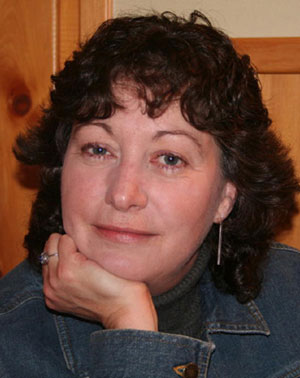 
Born in Calgary, K.L. Denman moved to Delta when she was eleven and now lives on a small farm on the Sunshine Coast. Her first work of teen fiction for reluctant readers, Battle of the Bands (Orca 2006), concerns an ambitious high school rock band named The Lunar Ticks, led by Jay, who falls in love with the leader of rival band from a different school.

Her second Orca Currents novel Mirror Image (Orca 2007), published after Denman had moved to Powell River, is a character-driven story about two outwardly different teenage girls, Sable and Lacey, who are forced to work together on a project by a sadistic grade nine art teacher, Mr. Ripley. Lacey looks like a brainless ditz in pink, whereas Sable is super-serious and has decided to dress only in black since age thirteen. At first Sable is dismissive of Lacey, believing she treats her boyfriend as some kind of fashion accessory, but Sable, who doesn't wear make-up, gradually learns it can be foolish to judge people by their outward appearances.

In K.L. Denman's Rebel's Tag (Orca 2007), for ages ten-and-up, Denman writes about an angry youth, Sam, who expresses his feelings by spray painting the sign of Aquarius, his tag, while climbing on rooftops. Sam is disturbed by the disappearance of his grandfather soon after Sam's father was buried. When this grandfather starts writing to Sam, and leads him on a frustrating scavenger hunt, Sam's distress bubbles to the surface and he is nabbed for secretive spray painting by an elderly couple. Sam must make the leap from rebellion to forgiveness.

Me, Myself and Ike (Orca 2009), a teen novel was nominated for a Governor General's Literary Award in the Children's Literature - Text category. It's the story of a boy struggling with schizophrenia. Publishers Weekly said of the book: "A stark and fascinating portrait of a paranoid and delusional teenager... Denman deftly gets into the head of a mentally unwell teenager while telling a coherent, engaging story."

First published in English by Orca in 2010, then in French the following year, Perfect Revenge (La revanche parfaite) is about a popular girl named Lizzie Lane whose life is ruined by the girl she socially destroyed.