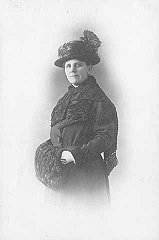 
The American "song catcher"; Frances Theresa Densmore gathered 83 songs at the hop-picking grounds in Chilliwack in 1926. These provided the basis for Music of the Indians of British Columbia (1939), an illustrated, 100-page volume that attempted to transcribe and describe various songs for future study. Densmore's work in British Columbia was peripheral to her overall career and does not provide a full representation of First Nations music in B.C. Having also recorded 199 songs of the Makah, Clayoquot and Quileute tribes at Neah Bay during the summers of 1923 and 1926, Densmore's collection of 53 Clayoquot and ten Quileute songs appeared as Nootka and Quileute Music (1943) with biographies of her informants and other supporting data. "On the Northwest Coast,"; she recalled in a 1935 speech, "the men sang about the whale and the shark, for those Indians went far out to sea in their canoes. An old medicine man living near the end of Cape Flattery recorded a song addressed to a shark with these words - 'Where are you, on whose back the waves break?' - The Indians used music in the treatment of the sick and some had different songs for each ailment. A doctor in British Columbia said that he had five songs and he recorded them all. He had one song for pneumonia and other songs for smallpox, palsy, fever and hemorrhage from the lungs.";

Born in Red Wing, Minnesota on May 21, 1867, Densmore was a young music teacher from a respectable Midwestern family who spent much of her life trying to preserve old Indian songs in wax for the Smithsonian Institution. She studied at Oberlin College Conservatory of Music, 1884-86 and taught piano in St. Paul, Minnesota, 1887-89, before moving to Boston where she took private lessons from composers Carl Baerman and John Knowles Paine at Harvard. Her interest in Native American music arose in 1893 when she visited the Chicago World's Fair and heard Kwakiutl songs and met musicologist James Fillmore. Densmore began recording Indian songs in 1907 after her visit to a Chippewa village near the Canada/Minnesota border in 1905. After that, she successfully petitioned the Smithsonian Institution's Bureau of American Ethnology for financial assistance. She received an Honorary M.A. degree for her enthnographic field work from Oberlin College in 1924 and a doctorate from Macalester College in 1950. Her work was also recognized with an award from the National Association of American Composers and Conductors in 1941. Densmore recorded nearly 2,500 songs of the Sioux, Yuma, Cocopa, Yaqui, Pawnee, Northern Ute, and various other tribes onto wax cylinders. These recordings were later transferred onto long-playing records and have been preserved in the Smithsonian-Densmore Collection of Indian Sound Recordings. As well, the hundreds of musical instruments she collected are stored at the Smithsonian Museum. She died in Red Wing, Minnesota, her birthplace, on June 5, 1957.