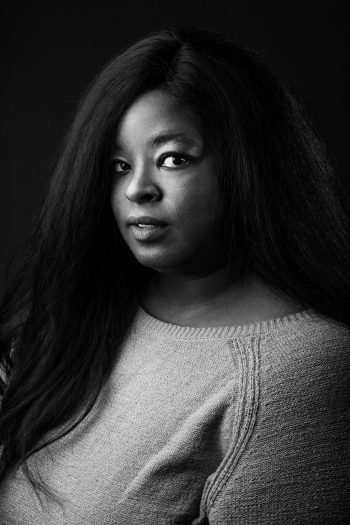 
Junie Desil is of Haitian ancestry, born of immigrant parents in Montreal and raised in Winnipeg. Her debut book of poetry, eat salt | gaze at the ocean (Talon $17.95) explores the themes of Black sovereignty, Haitian sovereignty and Black lives using the original Haitian zombie as a metaphor for the treatment of Black bodies.

Desil has performed at various literary events and festivals and her work has appeared in Room Magazine, PRISM International, The Capilano Review, and CV2. She is a UBC alumnus and a participant in Simon Fraser University's Writer's Studio.

Born in Montreal and raised in Winnipeg by parents who immigrated from Haiti, Junie Désil came to Vancouver at the age of nineteen to attend the University of British Columbia. As a student, she says she was “unused to a thirty-two-thousand-plus student body, isolated, and one of the few Black students.”

She struggled and a fellow student in an African American history class who, “noticing my struggle (sobbing openly in class, etc.),” facilitated a connection with their professor. That led to Désil being hired as a research assistant and sparked her interest in “examining and following the ‘colonial trace.’”

While still at UBC, Désil became involved with a group called Colour Connected Against Racism UBC. It was through this association that she was encouraged to publish a poem in a special race issue in The Ubyssey and started “what looks to be a lifelong passion for writing angry and impassioned poetry,” says Désil.

It all culminated in a debut collection of poems, eat salt | gaze at the ocean exploring Désil’s experiences growing up “Black on stolen Indigenous lands” combined with her personal narrative about slavery, Black sovereignty and contemporary Black lives.

Désil probes the meaning of a zombie, often used as a metaphor for the treatment of Black bodies. Indeed, the book’s title is a reference to a supposed cure for zombification.

Désil weaves in historical documents, newspaper articles and other ephemera as she probes the lives of Black slaves in Haiti and their fight for freedom, including a newspaper report of a slave revolt on March 13, 1792. She writes of America’s occupation of Haiti from 1915—1934 and links it to an American company that exploits Haitian workers.

Désil continues up to the present times and the Black Lives Matter movement. In one extended poem she writes, using lower case letters: “i took a snapshot of 2016. i counted, over two hundred deaths in one year. if we’re being comprehensive, this right here does not include the dead from the transatlantic slave voyage, those who leapt to their deaths, who died beneath the cargo hold, once stolen from their ancestral lands. those who died in violent capitalist servitude, who died in violent encounters with white holders of enslaved Black people… Black trans folks. they will need another page… this list is a list of names of Black people who have died south of this ‘border,’ so you might almost want to say this list is not Canada – i dare you… this is a piece that will go on for a while till you feel as paralyzed as i continue to be.”